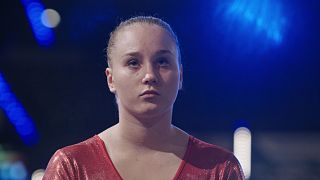 The film selected by Swedish cinema veterans as the country's Oscar entry for 2022 arrives in cinemas this week.

'Olga' depicts the story of a young Ukrainian gymnast torn between her dreams as an athlete and the accelerating course of history during the Euromaidan civil unrest in 2013.

Directed by Frenchman Elie Grappe, 27, who spent 10 years training as a classical musician at the Lyon National Conservatory, the film won the SACD prize at the Critics' Week at the last Cannes film festival.

From November 17 moviegoers in Switzerland, Ukraine, and France will be able to watch the film.

Despite sharing a name, the film's protagonist is not to be confused with that of Olga Korbut, a famous Russian gymnast whose rise to fame was documented in the 1973 documentary 'Olga'.

Instead, the plot is set in the early days of the Maidan revolution, a popular movement that will lead to the overthrow of the pro-Russian authoritarian regime of Viktor Yanukovych, followed by the annexation of Crimea by Moscow.

From the first shots, the tone is set: the young Olga (Nastya Budiashkina), a high-level gymnast, member of the Ukrainian national team, is in the car with her mother, when the latter, an opposition journalist, is victim of an assassination attempt.

To preserve 15-year-old Olga, the decision is made to send her to Switzerland, the country where her father comes from. There, in the heart of the Alps, she joins an elite training center to integrate into the national team.

But integration into this already very competitive environment is no easy task. She must learn French, and not be destabilised by the news from Maidan, the place where the revolution is taking place in Kiev and where her mother and her friends, back home, risk their skins for freedom.

Geopolitics invites itself everywhere, as when a Ukrainian coach is debauched by Russia under the dumbfounded eyes of Olga.

"The film deals with exile, Olga is torn between several loyalties. She is looking for how to reconcile her internal desire and the course of history", director Elie Grappe told AFP.

He started working professionally straight out of film school in 2016.

"When the videos of Euromaidan, which were shot by the protesters themselves with their smartphones, cropped up in the gymnast’s life, Olga is thrown into a floating space, in-between two worlds, constantly torn

"It is that conflict that this film conveys."

With no personal connection to Ukraine, he spent time in this country preparing his film, plunging into the post-revolutionary turmoil and surrounding himself with intellectuals to build the screenplay, co-written by screenwriter Raphaëlle Desplechin.

The film also shines by the performance of actresses, many of whom are professional gymnasts but novices in front of the camera.

In an interview with Semaine De La Critique (Cannes), Grappe describes the core of the film as "illustrating a taxing time, a time when we seek emancipation and to fulfil our desires".

Our own sense of identity as teenagers is reflected in this, he says. Catalysed by our newfound awareness of the world around us.

"Identity is unclear, in one’s flesh even, because the body changes."