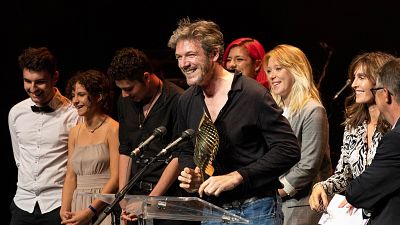 The French movie “Petite Nature” (Softie), the story of a sensitive, gifted 10-year-old boy growing up in a rough neighborhood and taken under the wing of a new teacher, won the top Golden Alexander prize on Sunday at the 62nd Thessaloniki International Film Festival. Aliona Reinert, who starred in the film, was named best actor.

The film was written and directed by Samuel Theis.

The silver prize went to “Clara Sola,” a film by Costa Rican director Nathalie Alvarez Mesen. The movie about a 40-year-old's sexual awakening after a lifetime of repression in a remote Costa Rican village is the country’s entry for best international feature film at the 94th Academy Awards.

The best director award went to Venezuelan filmmaker Lorenzo Vigas, whose Mexican movie “La Caja” (The Box) is about a teenager who travels to collect the remains of his father and who begins to doubt his father’s demise. This is the second feature film for Vigas, whose debut “Desde All” (From Afar) won the Golden Lion award at the Venice Film Festival in 2015.

The international competition, with 14 entries, was but one of the multiple competitions and prizes in the festival.

There was a competition for Greek films; a “Meet the Neighbors” event with films from southeastern Europe, the Mediterranean and the Middle East; and a “Film Forward” event featuring movies that “think outside the box.” A total of 200 films were screened physically and 144 others were available on a digital platform, the organisers said.