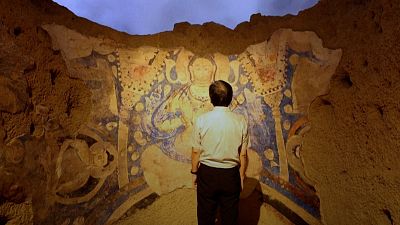 The clone was made using a mix of traditional and digital techniques to salvage the Afghan work's "spirit"   -   Copyright  AFP
By Theo Farrant  with AFP  •  Updated: 17/11/2021

Japanese researchers have crafted a ‘super clone’ of an Afghan mural destroyed by the Taliban 20 years ago.

Not a single fragment remains of the seventh-century cave painting demolished in 2001, along with two massive Buddha statues and other artefacts in Afghanistan's Bamiyan valley.

The wrecking of Afghanistan's ancient heritage sparked global condemnation at the time given Bamiyan's legacy as home to some of the world's earliest Buddhist art.

But a precise replica, the result of three years of state-of-the-art reproduction efforts, went on display at a museum in Tokyo in September and October, just weeks after the Taliban returned to power in Kabul.

The team say they hope the work will salvage the mural's ‘spirit' for future generations.

At six metres long and three metres high (20 by 10 feet), the intricate full-size copy has been dubbed a ‘super clone’ by the reproduction team at Tokyo University of the Arts.

"We have succeeded in recreating a very precise representation in three dimensions," from its texture to the type of paint, said the team's co-leader Takashi Inoue

Japan is a major donor to Afghanistan and has long been involved in heritage protection efforts at Bamiyan, a crossroads of ancient civilisations considered to be one of the birthplaces of Japanese Buddhism.

How did they do it?

The team digitally processed more than 100 photographs taken by Japanese archaeologists of the mural before it was desecrated, to create a computerised model of its surface.

They then fed this data into a machine, which carved the exact shape into a styrofoam block. To complete the replica, artists applied a traditional paint in a lapis lazuli shade similar to the one used for the original mural.

Through this process, "we can reproduce designs that are very close to the real ones again and again, to hand down their spirit to future generations," said Inoue.

To view the recreated Buddhist mural, check out the video above.

Swing from clouds at Russia's new 'Serenity and Delight’ exhibition

Tarantino's lawyer claims he has right to sell NFTs