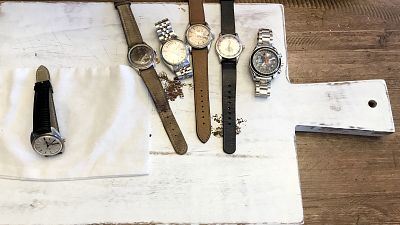 To some, a realm for only elite, well-cuffed buyers and private jet-riding debonairs, the Swiss watch industry is changing with the times and embracing a more thrifty, sustainable side: Second-hand sales.

According to a new report, published on 14 October 2021 by global accounting giant Deloitte, second-hand - or “pre-owned” as the industry likes to calls them - luxury watches are becoming increasingly sought after, with almost one-in-three buyers saying they’ll purchase one in the next twelve months.

“It’s a market that is strongly growing,” said Karine Szegedi, consumer and fashion and luxury lead at Deloitte in Switzerland.

“And it’s not only because consumers don’t have enough money to buy a watch from a primary market, but it’s about rarity and specific models.”

Indeed, the industry is embracing the move, with two-thirds of executives seeing it as having a positive impact on their brands.

“There could have been, a few years back, a stigma in the sense that it was - pre-owned watches, used watches - but it’s now a much more professionalised market with certified watches. And people also feel more comfortable buying them because they can trust the re-sellers more than before,” said Jules Boudrand, Deloitte’s watch industry lead.

The impact of the pandemic on Swiss watches

Like many businesses, Switzerland’s watchmakers are slowly recovering from the COVID-19 pandemic, which closed stores and manufacturers, and limited international traveller numbers.

According to leading association, the Federation of the Swiss Watch Industry, 2020 was an “unprecedented year”. The value of Swiss watch exports fell to 17 billion Swiss francs, compared with 21.7 billion a year earlier, an over 21 percent decline.

As with many other industries, sales through digital platforms helped brands mitigate some of the losses.

“The watch is still historically bought in the store, but you can have very expensive, couple of hundred-thousand-franc watches sell entirely over the internet and e-commerce. That is now not unusual,” Szegedi told Euronews.

Amongst the doom and gloom, China emerged as a vital export market - during the first European lockdown in spring 2020, the share of Swiss watch exports to the country more than doubled to 22 percent. It’s now considered to be the industry’s most important market in the near future.

While second-hand sales are on the rise, sales of luxury timepieces with price tags over 3,000 Swiss francs - about 2,800 euros - have been a “lifeline” for most brands.

Turning back the clock

It’s not clear when the industry will recover and reach pre-pandemic sales volumes, but 36 percent of executives expect it to be by the end of 2022, according to the Deloitte report.

A return to in-person sales should help. Switzerland lifted some lockdown restrictions in April, while a COVID-19 certificate is required for entry to restaurants, bars, museums, libraries and other some other leisure venues.

The prestigious Grand Prix d'Horlogerie de Genève (GPHG), dubbed the Swiss watch industry's “Oscars”, is set to return in-person on Friday 22 October (with the award ceremony on 4 November - which you can watch live on Euronews.com), after a socially-distanced affair last year. Winners of the best in show will take home the "Aiguille d’Or” grand prize.

Sustainability in a second

Aside from second-hand sales, another trend emerging is sustainability.

World leaders are set to gather in Glasgow, Scotland in November for the delayed COP 26 UN climate conference, billed as a “vital” gathering in attempts to limit global temperature rise.

Even Swiss watchmakers are playing their part. 72 percent of the brands surveyed by Deloitte are investing more in sustainability, concentrating on ethical sourcing and the environmental impact of materials.

“You can see a lot of initiatives from some of the brands to either use some recycled materials in the bracelets, in the straps, also sometimes in the cases,” said Boudrand.

“The clients are really asking more for the sustainability angle, and it’s going to be an increasingly important factor.”

'Oscars of watchmaking' honours an industry still alive and ticking