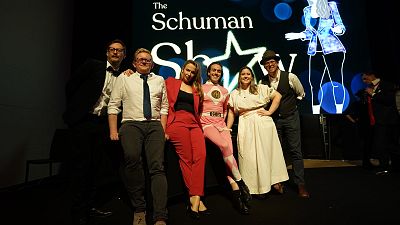 They say laughter is the best medicine, but can a new comedy troupe in Brussels cure the EU of all its ills? Almost certainly not. Nevertheless, Euronews went to meet the performers of 'The Schuman Show', who hope to make EU politics more appealing by making fun of it.

The title is a play on the dystopian film 'The Truman Show' and one of the European Union's founding fathers, Robert Schuman. In its various offerings it pokes fun at EU politics and depicts Angela Merkel and Donald Trump in a way the public has never seen them before.

"So great to see you hanging out also celebrating your Scottish heritage like I am," says the performer playing Trump.

Despite Brussels politics having a reputation of being tedious and obscure, there is plenty of material to work with for the cast, who want the European institution to take itself less seriously.

"Sometimes it's a little boring or whatever, but actually there's a lot of good material for comedy. In fact, sometimes the truth is stranger than fiction, you know. We make fun of the statements that the Commission might make and then the next day they'll make one that's just the way we satirised it," performer Craig Winneker told Euronews.

But will Brussels bureaucrats be able to take the joke?

"Personally I think that they're going to be grateful, because if I was a politician, and therefore a little bit narcissistic, I would enjoy that, finally, the European public sphere is happening, because people are making fun of me," noted performer Louise Larnach Day.

Maybe we want to see these Commissioners and EU leaders do more than say "We are deeply concerned".

Made up of former EU officials and journalists who deeply care about Europe, the cast feels that comedy is the best way to make Europeans less sceptical about institutions, even if their own frustrations about EU policy-making sometimes come out on stage.

"I am still the most photogenic world leader on the telephone!" screams a fake Ursula von der Leyen, in her typical pink suit.

"Did they not see my speech in plenary last week? I was very passionate, I said I was deeply concerned," she went on.

The show is a cross between late-night entertainment and political satire.

Using absurd theatrical sketches, witty monologues and catchy songs are not just an artistic endeavour for the cast, but also a way to protect democracy.

"Maybe we want to see these Commissioners and EU leaders do more than say 'We are deeply concerned'," expressed Kelly Agathos, director of 'The Schuman Show' and the interpreter of Ursula von der Leyen on stage.

'The Schuman Show' plays every Thursday of the month in the heart of the European capital and hopes to make waves beyond the Brussels bubble.