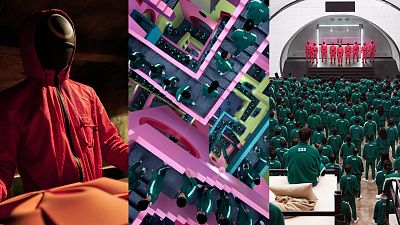 The sweet makers behind the traditional South Korean treat featured in Netflix’s Squid Game have been overrun with business.

The smash-hit series - which recently became the streaming platform’s biggest ever show - features a group of contestants who compete in children's games for the chance of winning 45.6 billion won (€33 million).

In one particular challenge, the contestants are challenged to cut out shapes from a crisp sugar snack called a dalgona. Those who fail are killed.

The life-or-death game was inspired by director Hwang Dong-hyuk's experience growing up in Seoul in the 1970s. At that time, the prize for a child who successfully removed the shape from the honeycomb was another free dalgona.

Hwang remembers licking the snack to loosen the shape and using a needle heated over briquettes - techniques which are repeated in the show's nail-biting dalgona scene.

"I would make the dalgona-maker extremely perplexed by succeeding on the most difficult shapes," says the director.

For the show, Hwang and artistic director Chae Kyung-sun hired ‘dalgona experts’ to make the snacks on location.

Those specialists were Lim Chang-joo and his wife Jung Jung-soon, who produced between 300 and 400 dalgonas over three days of filming.

Now their humble roadside stall in Seoul's theatre district is one of the hottest spots in the South Korean capital.

Orders of the 2,000-won (€1.47) sweet snacks are rolling in as soon as the stall opens. In many cases, customers queue for up to six hours to receive their sugary treat.

In about 90 seconds, Lim melts an individual portion of sugar above a burner, adds baking soda, flattens it into a circle, and punches it with the customer's preferred shape.

"I never imagined it would become this popular," Lim says, adding that his life has now become "super hectic".

"Of course, I'm happy because my business is doing well and now dalgona has become famous in other countries.

"I hope they make and eat their own dalgonas," he adds.

The dalgona first emerged in South Korea in the 1960s when the country was struck by post-war poverty.

Desserts such as ice cream and chocolate were not widely available at the time. Instead, the dalgona offered a more affordable treat for children, with many vendors setting up stalls near schools.

Lim and Jung started their dalgona operation with just €22 after closing their tailoring business during the 1997 Asian financial crisis.

Now South Korea boasts the 12th-largest economy in the world, but the dalgona remains a staple of traditional Korean life.

Squid Game is the latest manifestation of the ever-widening influence of the country's popular culture, epitomised by K-pop sensation BTS and the Oscar-winning movie ‘Parasite’.