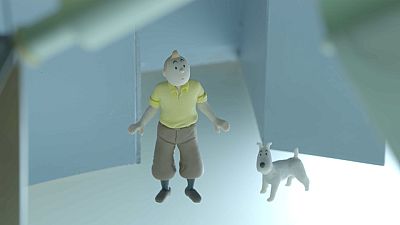 A figurine of Tintin and his loyal companion Milou.   -   Copyright  All rights reserved "Hergé" - Calouste Gulbenkian
By Josephine Joly  •  Updated: 27/10/2021

For the first time, Portugal is hosting an exhibition dedicated to Tintin’s creator, the multi-talented Belgian artist Georges Remi, better known as "Hergé" (the sound of his initials, reversed).

The exhibition at the Calouste Gulbenkian Foundation in Lisbon has been co-produced with the Hergé Museum of Louvain-la-Neuve, Belgium.

The exhibition reveals the many other facets of the artist by bringing together an important selection of documents, original storyboards, paintings, and photographs by Tintin’s creator, through which visitors can decipher the art behind his creative genius.

Inspired by several artistic movements of his time – from pop art to abstract art through to minimalism – the self-taught artist was also interested in ancient civilisations and the so-called "primitive arts".

"Here it's surprising to see other characters because we are all so obsessed and indoctrinated by Tintin, and suddenly we're confronted by other stories. But it's good to shake up the visitor," said Nick Rodwell, administrator of Moulinsart S.A., formerly the Hergé Foundation, the company that has managed the rights to the Belgian artist's work since 1987.

"We're talking about posters for tourism, we're talking about his designs for book covers, illustrations for books and, this will surprise people, because most people stayed with Tintin and couldn't possibly imagine that RG got involved in all that, but he was so prolific and he was looking for different paths to follow and he needed to be stimulated, he needed to be inspired, so he went into advertising," Rodwell added.