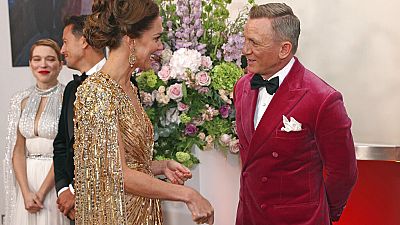 British royalty and Oscar winners walked the red carpet in London on Tuesday evening to mark the world premiere of the long-delayed release of the new James Bond film "No Time to Die".

Royal couples Prince William and Kate Middleton, Prince Charles and Camilla, Phoebe Waller-Bridge, and more delivered glitz and glamour at the city’s biggest red carpet event since the start of the coronavirus pandemic.

Shown at London's historic Royal Albert Hall, "No Time To Die" is British actor Daniel Craig's fifth and final outing as 007 in the blockbuster franchise.

The film was initially due to be released in April 2020 but has suffered multiple delays because of the pandemic. It will go on general release in Britain on Thursday and in the United States on October 8 – a year and a half behind schedule.

"A year ago, this was just a dream. It didn't look like we would get here. But we have and I'm just happy that we're here and we can celebrate with everybody. And I can see the cast and crew. I haven't seen them for two years now. And just to, you know, hopefully, give everybody a quiet hug," said Daniel Craig.

Bond called out for his misogyny

The Bond series has been criticised for the outdated image of its portrayal of women and old-fashioned British imperialism, but with Phoebe Waller-Bridge on the team, only the second-ever female screenwriter for the series, and American director Cary Joji Fukunaga, things appear to have changed for the franchise based on Ian Fleming's spy novels.

In the film, Bond spars with a black female MI6 agent, played by Briton Lashana Lynch, and has to take a back seat to her as she flies a plane.

Fukunaga stepped in after the original director Danny Boyle, known for 'Slumdog Millionaire', left over "creative differences" in 2018.

The new film's director has also criticised Bond's sexual exploits, especially in one of the 1960s-era films, in which Sean Connery's character "basically rapes a woman".

"That wouldn't fly today," Fukunaga stressed. He said in a promotional video that his Bond is "like a wounded animal", struggling because "the world has changed, the rules of espionage are darker in this era of asymmetric warfare".

"They have been able to update things. This time, Cary Joji Fukunaga is the first American director to ever direct a Bond film, and it is also co-scripted by Phoebe Waller-Bridge of Fleabag fame, in order to give some of the protagonists a more three-dimensional role which is something that has been sorely lacking from the Bond franchise," Exberliner Magazine film editor David Mouriquand told Euronews.

Craig gives up the keys to Bond's Aston Martin

In the latest film, which reportedly cost €214 million, Bond returns to active service after retirement, deploying his hi-tech gadgets in breathtaking landscapes in Italy and Norway while battling with villainous Safin, played by Oscar-winner Rami Malek from 'Bohemian Rhapsody' and 'Mr. Robot'.

But with Craig bowing out after holding the role longer than any of his predecessors since his 2006 debut, people wonder who will inherit his licence to kill.

Speculations are tipping the likes of Britons Tom Hardy, Idris Elba, or Regé-Jean Page, the mixed-race star of the Netflix hit 'Bridgerton'.

Daniel Craig won praise for adding depth and emotional complexity to the all-action role, but only reluctantly agreed to one final appearance as Bond.

Some factions of the franchise's fandom have long-desired for a woman to take the wheel. Though there has been hesitancy from production heads to entertain the idea, suggestions have included everyone from Lupita Nyong'o to Suranne Jones.