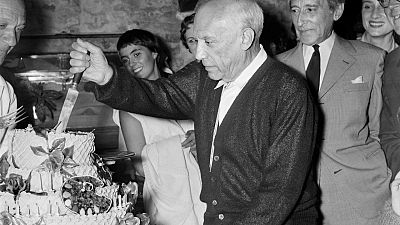 Nine works by Picasso have been donated to France by his daughter Maya and will enter the national collections at the Picasso Museum in 2022, French Culture Minister Roselyne Bachelot announced on Monday.

"It is with deep emotion that I come to celebrate the entry into the national collections" of this dation (the legal act of conferring or giving), said the minister who evoked an "exceptional event".

This "dation", which includes six paintings, two sculptures and a sketchbook that belonged to the giant of painting, thus allows Maya Ruiz-Picasso to pay her inheritance tax in kind.

These works will be presented in their entirety to the public from April 2022.

At the press conference on Monday, at the Picasso Museum in Paris, only one work was shown to the press: a cubist painting from 1938 called "The child with the lollipop sitting under a chair".

According to Olivier Widmaier Picasso, Picasso's grandson and present at the press conference alongside his sister Diana, this painting represents Maya, his mother.

The oldest painting in this collection dates from 1895; it is the portrait of Picasso's father, "Don José Ruiz".

The overall amount of the collection was not specified, with ministers arguing for tax secrecy.