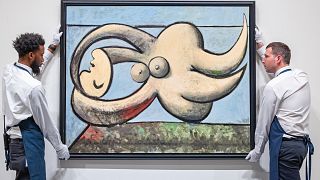 A captivating depiction by Pablo Picasso of his then 22-year-old muse and lover as a sea creature is expected to fetch more than $60m at auction in London next month.

The pair met in 1927 when Picasso was 45 years old and unhappily married and Walter was 17. At the time Walter, who lived with her family in Maisons-Alfort, Paris, had no idea who he was.

The following summer, Picasso secretly installed her in a seaside holiday camp close to where he and his wife, the Russian-Ukrainian dancer Olga Khokhlova, and their son were staying.

Described as the Spanish painter's “golden muse”, Walter figures in some of Picasso’s most sensuous and iconic artworks. Though their 14-year relationship remained a closely-guarded secret for years.

Femme nue couchée will go on sale at Sotheby’s in May. Brooke Lampley, chair and head of global fine art sales at Sotheby’s, described it as “a deeply lyrical ode to the artist’s unbound desire for Marie-Thérèse".

He said: "With her fin-like, endlessly pliable limbs, the portrait continues to enchant as it perfectly captures Picasso’s muse as the ultimate expression of his genius”.

The year 1932 is widely considered Picasso's "year of wonders" as one of his most prolific and intense. Last year another portrait of Walter painted in the same year, Femme assise près d’une fenêtre (Woman sitting near a window) sold for $103.4m at Christie's in New York.