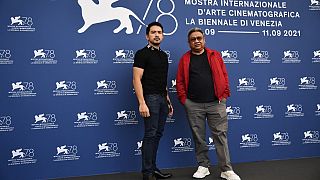 Filipino actor Dennis Trillo (L) and Filipino director Erik Matti attend a photocall for the film "On the Job: The Missing 8" at the Venice Film Festival on September 10, 2021   -   Copyright  MARCO BERTORELLO / AFP
By Euronews  •  Updated: 11/09/2021

Filipino director Erik Matti and his cast premiered "On the Job: The Missing 8", the filmmaker's latest thriller movie at the Venice International Film Festival on Friday.

The thriller depicts political corruption in the Philippines and is based on a true story, where a corrupt reporter is forced to investigate the mysterious disappearance of his colleagues. Meanwhile, an inmate who is routinely released from jail to carry out assassinations is sentenced to life in prison for a crime he did not commit.

Also in competition for the prestigious Gold Lion award is "Another World" by French film director Stéphane Brizé. His film follows the adventures of a couple going through a divorce.

But all eyes were on the newly reunited Jennifer Lopez and Ben Affleck, who had arrived together on Thursday.

The couple attended the premiere of "The Last Duel", a medieval film that Affleck co-wrote with his old friend Matt Damon and directed by Ridley Scott.

The old pals brought the true story of Marguerite de Carrouges, a 14th-century French noblewoman who claimed she was raped by an old friend of her husband’s, to the screens.

Marguerite claims she's been raped by her husband's best friend, Jacques le Grism but no one believes her accusation. But when Jean de Carrouges finds out about his wife's accusations, he challenges his friend to a duel to seek vengeance against the man he long regarded as treacherous.

The duel will be the last legally sanctioned duel in France's history.

The movie explores the story from three different angles, a form inspired by the great Akira Kurosawa’s Rashomon, to express each character's understanding of the truth and its consequences.

Veteran filmmaker Ridley Scott was himself honoured at the festival when he was presented with the "Glory to the Filmmaker" award in recognition of his 43 years in the industry.