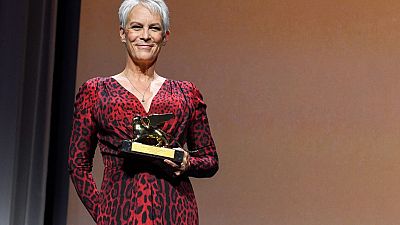 Hollywood legend Jamie Lee Curtis received the Golden Lion Award for Lifetime Achievement at the Venice Film Festival on Wednesday. She received the accolade in recognition of decades of work in the industry, including her famed role as Laurie Strode in John Carpenter's horror classic "Halloween".

The 62-year-old thanked her parents Janet Leigh and Tony Curtis during an emotional speech.

The cast of the Russian film “Captain Volkonogov Escaped” was also on the red carpet on Wednesday.

The movie had its world premiere at this, the 78th event.

Married filmmakers Natalya Merkulova and Alexey Chupov, who finished their screenplay in lockdown, call the movie "a post-modernistic parable with the elements of a mystical thriller".

"This film is not only about Russia, but it's also quite a universal statement in which we are concerned about the whole world and what's happening to it," said Merkulova.

Award-winning director Gabriele Mainetti also graced the red carpet with the cast of his new Italian movie "Freaks Out".

“Freaks Out” is Mainetti’s second film after his well-received 2015 superhero movie “They Call Me Jeeg”.