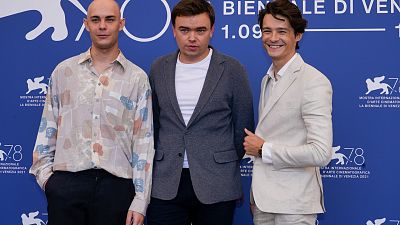 Mateusz Gorski, from left, Jan P. Matuszynski and Tomasz Zietek at the photo call for the film 'Leave No Traces' during the Venice Film Festival, Sept. 9, 2021.   -   Copyright  AP Photo/Domenico Stinellis
By Euronews  •  Updated: 11/09/2021

The film is based on a true story of a high school student beaten to death by a militia in 1983. The film follows a witness, Jurek, who becomes the number one enemy of the state.

Also in competition for the Golden Lion is "America Latina" by the D'Innocenzo brothers. The drama, set in the small city of Latina, is about a man with a seemingly tranquil, happy family life, who begins to unravel.

The thriller follows Massimo Sisti a successful dentist and loving father, who is forced to consider his own identity after a visit to the cellar, which brings unexpected consequences.

Venice was also the venue for the world premiere of "The Accusation", is also in the running for the festival's top prize. French director Yvan Attal presented his film based on Karine Tuil's bestseller "Les Choses Humaines". The story depicts the unravelling of an intellectual power couple whose son is accused of rape.

However, one of the biggest attractions of the day had little to do with cinema. Superstar sweethearts Ben Affleck and Jennifer Lopez arrived together in Venice for the premiere of Ridley Scott's medieval epic "The Last Duel" on the last day of competition at the Mostra.