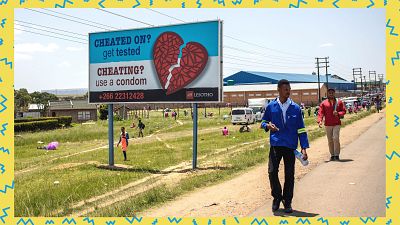 In the small southern nation of Lesotho, a 19-year-old activist who was infected with HIV at birth is publicising his status to help persuade local men that getting tested and treated for the virus is not a sign of weakness.

Rakhantša Lehloebi says many of his peers and older men continue to hide their HIV-positive status because of harmful cultural practices dictating that real men must deal with their problems in secret, especially when it comes to sensitive health issues like HIV.

Lehloebi tested positive at the age of five after his mother died of AIDS-related illnesses, leaving Lehloebi’s maternal grandmother to raise him.

Embarrassed and fearing her grandson would be discriminated against in their village of Maphutseng in Mohale’s Hoek district, Lehloebi's grandmother never told him of his HIV-positive status.

“Instead, my grandmother told me the antiretroviral medication was to treat many episodes of nose bleeding I experienced. I only came to know of my HIV status in 2017,” a decade later, Lehloebi said in an interview.

In 2019, he began actively participating in advocacy programmes that encourage other men to get tested.

His activism comes as the Lesotho government and its development partners are also focusing efforts on tackling the reasons why men are less likely than women to get tested for HIV.

The teenager uses every chance he gets to encourage his peers and older men to get tested and immediately start taking antiretrovirals if they test positive.

“There are men who are currently locking themselves up in their houses, refusing to seek medical attention despite presenting with signs and symptoms of sexually transmitted diseases," he said.

He blames this on the way local men are brought up, not to show emotions or ask for help.

“As a young man living with HIV, I know just how hard it can be for any man raised to demonstrate his manhood by bottling things up," he said.

He admitted that this has caused him to take risks with his health.

"I myself have defaulted on my medication a couple of times because I didn’t want people thinking I am weak by sharing my fears around living with the virus."

Set in a scenic landscape of hills and narrow valleys, the village of Maphutseng became Lehloebi’s home shortly after his third birthday.

This was after his mother died of AIDS-related illnesses in 2005, leaving relatives with no option but to send Lehloebi to stay with his grandmother.

“My mother was HIV positive but never enrolled for antiretrovirals because of the stigma," he said.

"Instead of taking her to a medical doctor for her to enroll in HIV treatment, her sisters took her from traditional healers to religious leaders."

His mother was HIV positive at the time she gave birth to him in 2002. She infected him and died three years later.

He is one of 73,000 HIV orphans -- children who have lost at least one parent to HIV-related illness -- in Lesotho, which has the second highest prevalence of the virus in the world.

Soon after moving to the village, Lehloebi started falling ill. He regularly spent time in hospital without receiving a clear diagnosis and was bedridden.

Then “one day my sister took me to (the capital) Maseru and I got tested for HIV. I tested positive on 6 March 2007 and I was not able to immediately go to school until the following year, 2008,” he said.

Yet his family decided against telling him the real reason why he had to take antiretroviral medicine every day.

He recalled that one day he was sent to collect the medicine himself.

"From that day, I only started taking the medication when my nose bled and I would throw the remaining tablets in a river because I didn’t want my grandmother to know.”

He suspects his grandmother later shared the secret of his HIV status with someone in the village because people started gossiping about it when he was in sixth grade at school.

“I was discriminated (against) . My fellow learners did not want to talk or walk with me. Children would not wash their hands after me at the school tap, " he remembered.

“I became a loner and that was the most painful year of my life. I lost interest in my school work. I didn’t understand what was going on because my grandmother insisted the medication was for nose bleeding and the outside world said I was HIV positive.”

After he successfully passed his primary school leaving certificate in 2014, Lehloebi's sister arranged for him to move to Lesotho’s capital of Maseru. This meant he transferred from the village clinic to Baylor College of Medicine Children’s Foundation, a centre formed in 2005 to help children living with HIV.

From personal ‘drama’ to activism

The foundation offers universal access to care, treatment, and support for all HIV-infected and -affected children and their families throughout Lesotho and organises weekly meetings for the children.

“I still didn’t understand why I was attending the meetings and I asked one of the attendees why he was there. He told me he was HIV positive and that is how and when I discovered I was HIV positive," Lehloebi said.

At that time, he was attending high school and didn’t want to face the same stigma as at primary school.

“I didn’t want people knowing or seeing me attending these meetings. I suffered a serious drama but Baylor patiently guided me into self-discovering and accepting my status," he said, while his sister offered "unwavering support”.

While Lehloebi did not want to reveal his HIV status, he had a nagging feeling that he wanted to help others in a similar situation to him.

Eventually he teamed up with his friends to start a support group for boys and men who are struggling to come to terms with their HIV status or even to get tested.

They first sought guidance and counseling from their supervisor at Baylor, who warned them “of the challenges that come with publicly disclosing our statuses and becoming activists", he said.

"In 2020, we publicly announced our HIV statuses and I am using social media platforms to challenge many misconceptions surrounding HIV."

It is still mostly women who approach him for help, he said.

He insists nevertheless that "a strong man stands up and asks for help," rather than choosing to "hide behind closed doors and die alone”. And he is optimistic about changing men’s attitudes.

“One man at a time, we will eventually have more men opening up,” he insisted.

He also wants to change how men view their sexual relationships.

One of the problems causing the spread of HIV is that "the majority of men want to prove their manhood by having multiple partners and I think that is a sign of weakness, " Lehloebi said.

Again, he puts this down to ideas about masculinity absorbed from childhood.

"We need to help them rediscover the true meaning of manhood because the manner in which we are raised, messes us up as men."

‘Shameful to undress in front of a female nurse’

Despite its small population of 2 million, Lesotho has the second-highest HIV prevalence in the world after Eswatini.

According to a recent study by the Lesotho Population-based HIV Impact Assessment (LePHIA), the total adult population living with HIV is 306,000 and 20.8 percent of them are males.

Data from LePHIA also demonstrates that men in Lesotho are less likely to get tested for HIV.

According to estimates by LePHIA, 71% of males reported knowing their HIV status compared to 81.5% of females. Men are therefore less likely to get access to appropriate care and treatment services.

To close this gap, the Lesotho government and its development partners have introduced men’s clinics at some busy health facilities to scale up HIV treatment access for men, run by the Elizabeth Glaser Pediatric Aids Foundation (EGPAF), a US-based nonprofit.

Men need separate clinics because they tend to “perceive clinics as more women- and child-friendly, they have a concern about services provided by female health workers," the foundation says on its website.

Another factor is that men's "schedules don’t align with the long wait times at clinics and with the services only being provided during hours when they are at work”.

Seabata Makoae, a social worker for She-Hive, an association of survivors of gender-based violence and those affected by it, said in an interview that many men in Lesotho do not want to take HIV tests because doing so is seen as a sign of weakness.

“A lot of men do not want to be seen going to the clinics to be tested for HIV because they hold the deeply rooted, unhealthy thoughts that doing so would make them be seen as weak men," he said.

The gender activist said that popular ideas that men should suppress their feelings or emotions at all costs affect their decisions, even on serious issues such as seeking health services.

Even when men spot signs that they may have sexually transmitted diseases, "they will not go to the clinics because of stigma," he said.

Some even believe "it is shameful for them to undress before a young female nurse."

Men rely instead on their female partners getting tested for HIV, either voluntarily or when pregnant, and "use their partners’ HIV test results as their own results," Makoae added. They assume wrongly that a partner's negative test indicates their own status.

Makoae says fear of being seen as weak also means some men stop taking medication they are prescribed to control HIV infection.

“All of this boils down to the manner in which men were raised, to withstand pain against all odds."

To help release this emotional suppression, She-Hive has a special programme targeting men only and has created a safe space for men to open up.

“This is where we talk to them in their own safe space -- men to men -- and they are more open because they don’t fear being judged or laughed at by the women. They know and trust the process: that this is men sharing amongst themselves,” Makoae said.

He also suggests that families also need to change and raise boys with less toxic attitudes, stressing that this is a deep-rooted problem in Lesotho.

“There is this thing that we grow up with as Basotho men, that a male is not allowed to cry or express pain in any way, " he said, referring to the country’s main ethnic group.

“We grew up in an environment where boys are treated differently from girls, boys are taught to toughen up while girls are told it is OK to cry and express your feelings."

Activism by young men like Lehloebi goes a long way in breaking down barriers preventing men from seeking help, he said.

“Having people like (Lehloebi) openly talking about their HIV statuses would encourage others to go for HIV testing and open up about their status," he said.

"In that way, we are encouraging other men to adhere to medication as well as showing them that asking for help does not make one a weak man."

_This story was edited by Anna Malpas. _