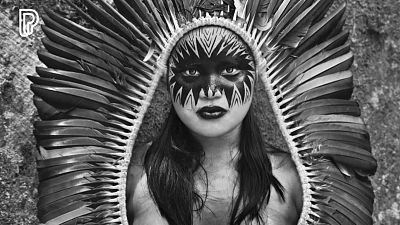 At the Philharmonie de Paris, two iconic artists have come together for a powerful exhibition.

Brazilian photographer Sebastião Salgado has over 200 black and white photos on display taken during his seven-year stay in the Amazonian forest. French musician Jean-Michel Jarre is providing the soundtrack.

Called "Amazônia" Salgado believes the purpose is not aesthetic, but political, particularly with regard to the Brazilian government.

Salgado references Brazilian President Jair Bolsonaro's letter to U.S. President Joe Biden, in which he promises to stop illegal deforestation in the Amazon.

"Mr. Bolsonaro's government tells lie after lie," he said. "He gives the impression that he is solving problems but he is telling lies to continue destroying."

The effect of Salgado's photos is strengthened by his collaboration with musician Jean-Michel Jarre, who composed an original soundtrack especially for the exhibition.

Jarre explained some of the challenges to consider when composing the music.

"There were a lot of pitfalls in relation to a work like this. Trying not to fall into ambient music, not to fall into world music or into something too ethnic, but to account for something quite particular about forests," he explained.

"All the sounds of a forest are sounds totally independent of each other i.e. the singing bird totally ignores the people passing by, the rain falling on the stone, etc. And yet, for the human ear, this forms an overall harmony, which is a harmony without orchestration but is a harmony of the forest."

Salgado met with at least twenty indigenous communities while in the Amazon for this project.

The exhibition is on at the Philharmonie de Paris until 31st October.