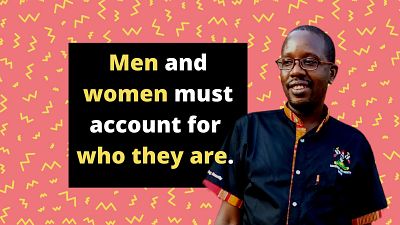 Until recently, there has been notable public interest in men and boys’ identities, conduct, behaviour, and the kinds of constraints men encounter in everyday life. This wave of interest is inspired, in some ways, by a critical agenda of revealing the dynamics of gender, including conversations on formerly unexamined experiences of men in public discourse, scholarship, activism and generally in everyday life. In particular, increasing focus on men, as subjects of gender conversations could spark a possible change.

That change involves unpacking historical forms of patriarchal power and privilege, interrogating the social process through which masculine and feminine behaviours and practices are framed, policed and reproduced, the effect gender identities have.

This wave of thought motivated my reflection on the common yet taken-for-granted social learnings and expectations about men in Uganda. Social sanctions such as “Onaba Musajja nabakyi ggwe?” what sort of a man will you be?, common to most Ugandan communities, are the subject of this reflection.

In early 2008, I lost my sister after a short illness. She was in her prime years, newly graduated and working at one of the universities in the country. Her passing happened in the same season my dad had retired from public service after 40 years of work.

These hard times occurred when I had just enrolled for graduate studies at Makerere University, with my sister as one of my volunteer sponsors. Her passing and the circumstances at the time could be described as unbearable. However, it was my dad’s reaction to these challenging times that left me with an avid urge to know who my dad ‘really’ was.

I had keenly observed, albeit unintentionally, that unlike most of us who broke down emotionally, my dad did not cry throughout the grieving period nor at the final send-off of my sister. When I returned home from the university a month after the burial, I found my dad perusing through a photo album of my sister. I never had a conversation with him about what he was going through at the time.

Besides, our conversations with him were very limited and often predictable. They rotated around requests for school fees or when he was required to go for parents’ meetings at school. We hardly talked, laughed, and joked as we did with the rest of the family members.

Looking back at these subtle everyday experiences – the relationship with our dad and his emotional expressions or the suppression of these during the bereavement – alerts us to possible ways through which men’s behaviours and practices are guided by sets of expectations.

Why didn’t my dad cry over the passing of his young daughter? Or perhaps he did, but how and where? What constrains men’s public expression of emotions of this nature? What implications do such suppressions of masculine emotions have on men and other people around them? These and perhaps many more questions could be part of the contemporary concerns of our time.

It is astounding how such kinds of constrained men’s expression of emotions are widespread across different cultures, although with contextual particularities.

Quite often, there are moments in my community where male babies are restrained from crying, just because they are expected to bear the pain as the ideal of manliness. In our local Luganda dialect, it is not uncommon for a young crying boy to be teased and asked Onaba mussajja nabaki ggwe? (what sort of a man will you be?).

In the east of the country, a common cultural practice of male circumcision is a rite of passage into adulthood. During this process, the boy facing the knife must stand strong and face the cheering crowds of men without blinking. Going against this tradition (e.g. opting for sedated hospital circumcision) has life-long implications of being discredited as a man.

Experiences such as these alert us to ways in which men and women must publicly account for who they are. Often, men's and women’s actions in everyday life are dictated by society's expectations, i.e. how they might look and how they act.

Negation, repression and the silencing of men’s expressions such as prohibited crying amongst young boys and in their adulthood, might reveal clues to the underlying and fundamental regulatory frameworks that guide acceptable forms of male and female behaviour.

Yet, these actions constrained by gender are both serious and consequential.

Policing men’s emotional expressions e.g. through instruction not to cry, to man-up, to face hardships like a man, among other stereotypes, have the effect of depriving men of cultural, social and linguistic emotional resources that have psychological and therapeutic benefits. In effect, characterising emotional virtues as unmanly deprives men of relational experiences and drives them towards depressive disorders.

For instance, there are health studies, which indicate that gender socialisation experiences, which reinforce men’s anger and emotion suppression responses, can cause and contribute to depression. There are experiences where ‘hardened’ forms of male behaviour are linked to the risks of violent death, whether this violence is amongst male peers or which is perpetrated against women and girls.

I must note that regardless of the pervasive character of patriarchy and the prevalence of gender socialisation, in which men's and women’s conduct is policed by a vast array of social institutions, there is nothing about a gender system that is given.

Men's and women’s behavior and practices are a product of the societies they inhabit. As such, gender is an innovative affair. Although, it is quite clear that there are strict punishments for contesting the script by performing out of turn or through unwarranted improvisation.

Understanding that gender is social and that its associated harmful behaviours and expectations can change is an optimistic aspect of any effort towards the transformation of unequal gender relations.

Men and women can perform alternative ways of being beyond the normalised yet harmful behaviours and practices. Men can step outside the reach of power and upset the established laws. What is needed is to know the cost of performing masculinity differently in progressive ways and the kinds of social, cultural and linguistic resources we need to do so.

Dr Amon Ashaba Mwiine is a Lecturer at the School of Women and Gender Studies, Makerere University. Supported by the Andrew W. Mellon Foundation, he is a research fellow in the College of Humanities and Social Sciences at Makerere University and works on Feminism encounters Masculinity. Dr. Mwiine is an author of "Negotiating patriarchy? & Men in Kitchens and the (re) configurations of masculinity in domestic spaces during Covid-19 Lockdown".

Where black women stand in feminism and patriarchy | View

Illegal miners make tough choices to provide for their families