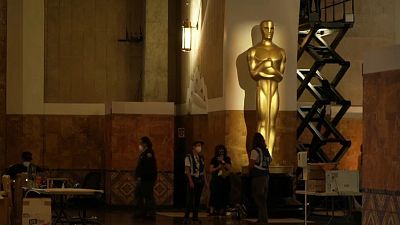 It has not been an easy few years for awards ceremonies, with viewer numbers of both the Grammy's and the Golden Globes nose-diving and then the COVID-19 pandemic necessitating virtual screenings and interviews with nominees and contenders on Zoom rather than face to face.

But with the Academy Awards due to air on Sunday, Oscar-watchers hope that the changes will make for a better event, with films nominated for their quality rather than who their stars or directors are.

"As opposed to in-person events where the contenders and the nominees can schmooze all the voters and help get votes that way, this time it really was about, I believe, the films and the performances and almost had a purity to it that I thought was very refreshing," said TCM Host Dave Karger.

"I look at the movies that were nominated for best picture. Those eight films, that's one of the best crops of best picture nominees that I can ever recall."

The game has also changed in other ways in Hollywood. After the first non-English language film, Parasite by South Korean Bong Joon-ho, won Best Picture in 2020, diversity is the order of the day.

Among the surprise films this year, Minari by Lee Isaac Chung, a Korean-American born in Denver, Colorado, which received six nominations, including the Oscar for Best Film.

The favourite film is Nomadland from Chinese-American director Chloé Zhao which presents a very un-Hollywood picture of modern America.

Meanwhile, the film industry is undergoing great change with Netflix and the like challenging traditional cinema-going.

Karger believes the Oscars are still a big deal in pop culture, but people just watch differently these days.

"The television landscape is more and more fractured each and every year. There are just more things to watch, more choices to watch. So this idea of everyone watching one program at the same time, with the exception of a big sporting event, is kind of gone.

"A lot of people are watching this stuff online or just watching the highlight clips the next day."

He also says that ratings tend to slip when there aren't big names up for awards.

"Add that to this overall trend that we've seen in the past few decades, where smaller, more intimate films are being recognized by the academy, which I think they're all deserving.

"But, you know, with a few exceptions, like 'Black Panther' or 'Once Upon a Time in Hollywood,' lately, there have not been the Top 10 films of the year in the box office and the Oscar nominations list don't always overlap.