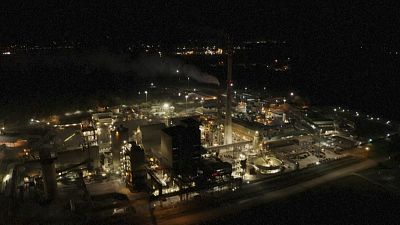 In Europe, we are used to hearing the stories of the poorest and most marginalised people in Africa only when tragedy strikes. For example, we only hear about miners - men and women who would stop at nothing to feed their families - when something catastrophic happens underground.

But have you ever wondered how these people feel? What kind of pressure do they have to face on a daily basis? And, most importantly, what are the consequences for the families left behind, when their breadwinner is willing to do whatever it takes to put bread on the table?

As part of its Cry Like a Boy series, Euronews follows up the publication of two exclusive podcast documentaries with this video testimony that sheds a unique light on the plight of Lesotho's mining families.

In this video (click ⬆ on the player above) we tell the story of one such family, the Tlali family.

The man of the house, Motoana Tlali, dreamt of becoming a businessman but had to give up all his dreams when poverty struck after the death of his father.

At 21, he left home for a gold mine in South Africa, where he worked, digging and shoveling, for the next 32 years of his life - hating the underground work "with every one of my fibres".

Down there, he saw the worst. One day, 14 of his colleagues perished right in front of him in a terrible accident. Motoana Tlali was the only survivor of a 15-man squad.

When we met up with him, at his home in the Bela-Bela Constituency of Berea, he told us those wounds were still fresh. He still had nightmares, but in years he hardly shared any of his painful experiences with his family.

His wife, ‘Makhabo, recalls he hardly visited his family when he was working in the mines, and when he did, he used to drench the visit with alcohol and abusive behaviour.

"I suspect that it was the tragic accidents that he witnessed in the mines that pushed him into being a heavy drinker, maybe he wanted to block out the dramatic experiences from his head", she tells Euronews. "Mines paid good money for people who were not educated, and back then miners were the envy of all their peers and parents".

A few weeks after recording this interview, Motoana Tlali died of pneumonia at 68. Lung diseases are common among those who worked in mines.

He leaves behind his wife, four sons, and two daughters.

Despite the tragic life of his father, one of his sons - Tlali Benedict Tlali - still wishes to follow in his father’s footsteps and one day be employed in South African mines. Just like him, he thinks working underground is the only way he can escape poverty for good and best provide for his family.

When an abusive husband decides to ask for forgiveness and change