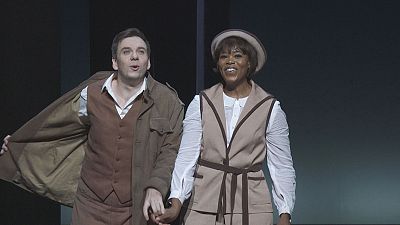 As curtains have come down in most of Europe's theatres, Musica takes you back to a magnificent production which premiered this spring - the reimagining of Jules Massenet’s ‘Manon’ - that showed at the Opéra Bastille in Paris.

"What really convinced me to stage the opera in the Roaring Twenties were personalities like Mistinguett and, in particular, Josephine Baker. This was the first time in history that women could become somebody without standing on the shoulders of certain men."

The latest operatic production by Vincent Huguet transforms Massenet’s original creation, based on a novel by Abbé Prévost, into something entirely different.

Originally set during the reign of King Louis XV in 18th century France, the French director has chosen to exchange this era for the freewheeling decade of the Roaring Twenties.

Huguet says that he was particularly inspired by women from that period, like the French actress and singer, Mistinguett, as well as entertainer, Josephine Baker.

The South African born vocalist, portrays a liberated heroine, where the story revolves around Manon’s epic journey with her devoted chevalier Des Grieux.

"She is in power the whole time," Pretty Yende explained.

Benjamin Bernheim added: "It is a very modern couple."

"Des Grieux totally accepts the idea, that a woman is above him, better known and stronger then him," he said.

The opera revolves around the journey of the irresistible Manon and her devoted chevalier Des Grieux.

Huguet’s setting provides the perfect backdrop for a period where social upheaval and the changing role of women were particularly prominent.

His decision to reimagine a strong female lead is even more poignant in the wake of the MeToo and Time’s Up Movements, where women standing up to men is the defining message.

"What really convinced me to stage the opera in the Roaring Twenties are personalities like Mistinguett and in particular Josephine Baker. This is the first time in history that women could become somebody without standing on the shoulders of certain men," Vincent Huguet said.