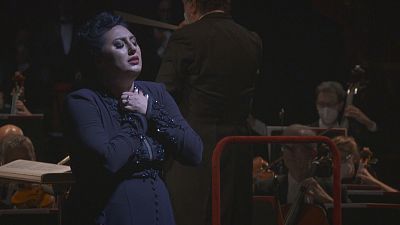 Aida is, of course, a world-famous opera, composed by Verdi and premiered in 1871. Yet it managed to have a different world premiere at Milan's celebrated La Scala opera house this October - where it also received its European premiere in 1872.

This time, it was performed in a previously unknown first version. This alternative Aida - with an extensively different third act - was made public only last year, after an extensive Verdi archive was finally made public.

Although rapturously received, this new version of Aida might never have been performed. It was discovered in a locked trunk at the composer's family villa along with 5,000 other documents of his.

Many of them were crammed into folders with "burn these papers" scribbled on the front of them; an instruction which, fortunately for Verdi enthusiasts, was never carried out. The musicologist Alessandra Carlotta Pellegrini has described the documents as like looking into “the workshop of the composer.”

The noted Italian conductor Riccardo Chailly, who presented the new version at La Scala, is delighted that this initriguing variant has been made public - and now even performed:

“When we're speaking about a genius like Giuseppe Verdi, obviously, if there is a possibility of searching for something we don't know, I think it is only an enrichment for everybody and certainly a discovery of great music.

"This is what it is: almost a hundred bars of music.”

The reinstated original opening of Act Three differs significantly from the more familiar version. Verdi dropped and replaced this original sequence shortly before the first performance.

The composer then reused parts of these original scores three years later for his Messa da Requiem, which was also recently performed at La Scala and again conducted by Riccardo Chailly.

The Georgian Mezzo-Soprano Anita Rachvelishvili, who sings the role of the powerful pharoah's daughter Amneris, was delighted to take part in this new version under Chailly's guidance:

“I think Maestro (Chailly) is the type of musician who likes and loves to discover new, interesting things in music.

"And there will be people who will say, 'No, this is not Aida. This is something else. I want the old version'.

"And there will be people who will accept it and will love it. So I love his courage to say to the people: 'You have to choose. I like it. I hope you like it too'.”

The opera is set in ancient Egypt and indeed had its 1871 premiere in Cairo, having been commissioned by the city's Khedivial Opera House. It concerns the impossible love between the Ethiopian slave Aida and an Egyptian military commander, Radamès. But Amneris wants him for herself - in vain.

“I like everything about this woman, because she's not only fragile, she's in love.

"There is a lot of sensibility in her soul. Verdi, the way he writes the music, indicates exactly this: a huge bomb of emotions.

"And that's what I always try to show that it's a really, really big pain that she has in her heart.”

Riccardo Chailly particularly likes the ill-starred conclusion of the opera, performed by Aida and Radamès:

“My preference, the deepest preference, is the final duet of the last act. I think the music transposes all of us to a different world.

"Even though the situation is tragic, it has to deal with death, the music still builds an incredible quality of spirituality, which to me, every night, is a very deep emotion to connect.”