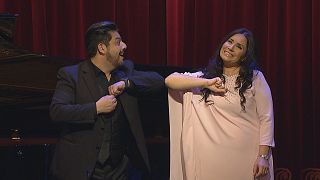 Bulgarian opera star Sonya Yoncheva is one of the most exciting sopranos in the classical music industry.

She recently performed at the Rolex Perpetual Music Concert, which took place at the Berlin State Opera, alongside a very select range of talented musicians, she chose especially to perform alongside her.

For this episode of Musica, Euronews went to the special concert and spoke with Sonya.

She told us the advice she gave her artists before the concert started.

Please do whatever you want. I trust you totally, because I know that this is the best way to work with artists. They need to feel that we trust them. And all these beautiful pieces came out.

The mandolinist Avi Avital played a song, based on a traditional Bulgarian folk song called 'Bučimiš' that he learnt from an accordion player.

The most interesting thing about it is the tempo. It always excites me these rhythms, and that gives it a lot of spice.

Sonya said she was very happy he had chosen to play the song because it originated from her home country.

“When I discovered that he wanted to perform this, I said, wow, you're going to break my heart," she added.

After months of isolation because of Covid-19, the musicians at this unique concert found their audience again - and their sense of purpose, as tenor Charles Castronovo explained.

When you are with your children or you are with your family or loved ones or whatever, there always seems to be a soundtrack behind that, a musical soundtrack. So when that song comes on and it brings back those memories, you realise how important music is to our psyche and in times of trouble, music reminds us of these kind of more positive things.

You can watch the full concert on Medici.tv.

The replay is available until the 31 December 2020.

Sweeping melodies with Jonas Kaufmann at the Summer Night Concert