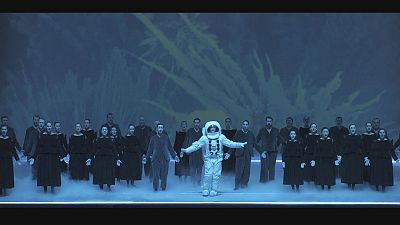 Handel first performed The Messiah in Dublin in 1742. Nearly 50 years later, Mozart re-orchestrated the work in German translation to Der Messias.  And it's Der Messias which premiered in Mozart Week in Salzburg in a production staged by American director and visual artist Robert Wilson, known as the 'master of minimalism'.

Wilson is perhaps most easily recognised for Einstein on the Beach. Widely credited as one of the greatest artistic achievements of the 20th century, this rarely performed work launched Robert Wilson and composer Philip Glass to international success when it was first produced in Avignon, France in 1976.

For Robert Wilson, the strict structure of Der Messias, determined by the alternation between solo numbers for the four vocal soloists (Elena Tsallagova Soprano, Lucile Richardot Mezzo-soprano, Richard Croft Tenor and José Coca Loza Bass) and an equal number of choral sections, is the starting point for a staged performance that works with surreal images and attempts to create a vessel for the music.

“What can I do to give space to the music? If I close my eyes, I begin to hear in a more concentrated way." he says. "So can I create something on stage with my eyes open that'll help me to hear better?”

Rolando Villazón is the artistic director of Mozart Week. He compares Mozart's Der Messias to a painting.  He says he loves how Mozart moved the oratorio from the Baroque to the classical period.

“It’s as if a painting develops (into something new), a painting which shows numerous facets," he explains. "As if we walked through an enormous painting, as if we entered it and saw how the light changes.”

At the end of the 1700s, Mozart accepted a commission to adapt Handel’s “Messiah”.  Salzburg’s famous composer changed some of the pitch and replaced certain instruments.  He invented rich woodwind parts, filling out the contrapuntal structure contrived so ingeniously by Handel with new colours.

“Mozart put together a more symphonic orchestra," says conductor Marc Minkowski.  "He also added light -  it's as if Van Gogh had painted the Mona Lisa. Indeed, as if a painter added colour by using different harmonies."

“The beautiful thing about Mozart's music is that there's light that brings hope.”

Mozart’s Der Messias will be shown on July 24th and July 26th at the Salzburg Festival and on September 16th, 18th and 19th at the Théâtre des Champs-Elysées, Paris.

Forget politics and bureaucracy. Having a stronger cultural indentity will unite the EU ǀ View

Bellini's Pirata: a tale of love, betrayal and madness