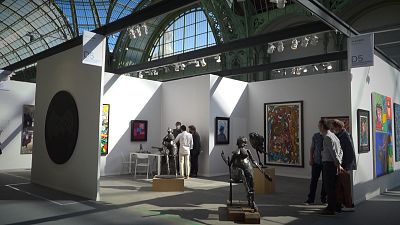 Originally cancelled because of the COVID-19 pandemic, then held online, the Art Paris event for modern and contemporary art has finally taken place at the Grand Palais des Champs-Élysées. Nearly 57,000 visitors attended, with work from around 900 artists on display.

The event's director, Guillaume Piens, admits it's been a very difficult time:

"The galleries are really very worried. They haven't seen any collectors, they haven't sold anything, it is a nerve-racking time.

"But I think here we can see the joy and hope of the gallery owners in finally being able to show their artists and to sell their work."

Restrictions on international travel have taken their toll too, making it more difficult to sell abroad.

Gaël Charbau, an independent curator, says newer artists have borne the brunt of the current situation:

"The most fragile, the most disadvantaged in this ecosystem are the youngest artists, because they need recognition outside the French art scene."

To support these upcoming artists and new galleries, Art Paris created a space called Promises, where 14 galleries exhibited paintings and sculptures. Rosa Maria Unda Souki's work was included; much of it focuses on daily life and the home:

"I don't see the bathroom as an ordinary space, but a special space where we can be ourselves when we are very lonely, where we can confront our emotions in a safe situation."

Each version of the picture shows a different mood - from love to sadness.

Rosa says the last in the series was initially about fun, but it ended up being about black humour and the lockdown:

"I wanted to talk about joy, the pleasure of water, but it was during confinement that I made it, so I thought more about the humour - the way of laughing at our tragedy, at our dramas."

Although Art Paris is an art fair - where the goal is to sell art - it is more exhibition-like than some fairs, with a strong editorial feel.

"I feel that we have moved on from art which is too conceptual, or very conceptual - based on ideas, to return to a type of art which is really anchored in the subject, in the image, in the portrayal."

One focus of the fair was the French scene and its "unique and universal stories" - while the other major theme was the Iberian peninsula from the 1950s onwards, with visitors including former French prime minister Manuel Valls. His late father Xavier had some of his paintings included.

Manuel Valls was delighted to see his father's work on display, in the city where he created so much of it:

"My father was a great Spanish artist, who worked mainly in Paris. He created objects of great softness, great light, great meticulousness, with a lot of poetry. "

It's been a difficult year, an emotional rollercoaster of a year for Art Paris and indeed for many other major events.

Next year, the event will be held in a special pop up version of the Grand Palais des Champs-Élysées while the historic 120-year-old venue is renovated ahead of its re-opening in time for the 2024 Olympic Games.