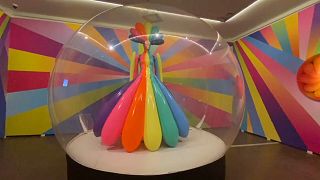 Big, bright... and made out of latex.

Big, bright... and made out of latex.

These sculptures and dresses were created by Russian artist Sasha Frolova.

Her works include sculptures, music performances, and latex dress designs.

"I think that the main job of an artist is to create a parallel reality," says Frolova.

There's no limit to Frolova's creativity, but objects made from latex do seem to have one — they have a life span of about five to ten years, depending on how they are made.

The artworks have to be regularly deflated to reduce stress on the material.

"These objects are weightless. With their scale and size, they are fragile, light, filled with air, and they create something magic and fairylike, that will soon disappear," says the artist.

Frolova marked the opening of her exhibition, she dressed in a latex costume and sang one of her own compositions.

The exhibit is full of spectacular creations, such as a "Telepator", an antenna that conducts inspiration, or "Lyubolet", an alien-style aircraft that is fueled by love.

"It's much easier to talk about death, problems, blood, and monsters, to become popular and famous due to that, than with happiness, love, rainbows, flowers."

Frolova argues her characters represent extreme femininity, not overt sexuality.