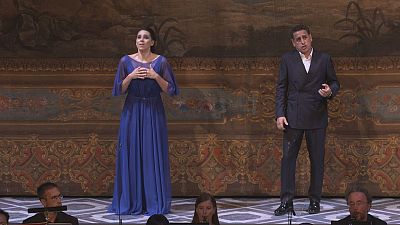 The celebrated tenor Juan Diego Flórez has led the first of a series of special Rolex Perpetual Music Concerts to support singers and musicians during this critical time for the arts.

It was held in Rossini’s birthplace – the Italian coastal town of Pesaro – and featured artists from around the world, performing with the Rossini Symphony Orchestra.

“The Rolex Perpetual Music Concerts are a wonderful initiative because they are helping the world of arts, especially classical.

"I am used to really connecting to the audience and to see a full theatre react to the opera, to the action, after an aria, to applaud. You miss that vibe, that energy that the public gives you."

Nino Machaidze was one of the singers handpicked by Flórez to take part.

The Georgian soprano, who rose to fame after playing Juliette in a production of Gounod's Roméo et Juliette at the Salzburg Festival in 2008, says she has hugely missed performing:

“It's months and months that I'm not singing!

"I just can't wait to go back to the stage, to sing again with an orchestra, to feel that magic that –only on stage – we artists can feel.”

The concert featured a selection of excerpts from Rossini operas under the baton of renowned American conductor, Christopher Franklin, who was surprised and impressed by some of the inclusions:

“This programme, when they sent it to me I was really happy because often opera programmes can be sort of the 'Greatest Hits' - and there are some of those in this programme as well.

"But there are serious, romantic Rossini arias in here as well, there is a little bit of drama and then are pieces that maybe people have never heard.”

Such as Flórez' opening aria. The Peruvian star explains his unusual choice:

"There is the cabaletta - the fast part - and this is maybe the most extreme Rossini you could find (with) high C's.

"It is an aria that I (have) recorded but I have never sung live, so why not?”

Further Perpetual Music Concerts will be held in Berlin and Paris in September.