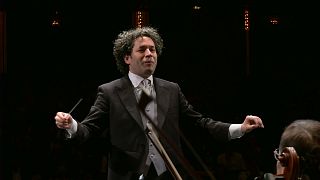 The prominent Austrian festival of music and drama had a treat to mark the Salzburg Festival's 100th anniversary with Gustavo Dudamel conducting Stravinsky's 'Firebird' with the Vienna Philharmonic.

In this week's edition of Musica, Euronews spoke to the famous conductor about the magical event.

Conductor Gustavo Dudamel talked to Euronews about what the whole experience was like for him.

"I think it's a piece that is this very, very important, part of my musical soul.

"Since the beginning, you know, you have these moments. You're searching for something.

"This also has the soft and the delicate parts. So you have to balance these two things with the rhythm, with the tempo, and also with the lines that he is bringing," he added.

The 'Firebird' was originally composed for the famous Ballets Russes - a ballet company based in Paris that performed between 1909 and 1929 throughout Europe and on tours to North and South America.

It premiered in 1910 and was Stravinsky's breakthrough.

Based on a Russian folk tale, it tells the story of a mythical firebird that gives a prince an enchanted feather that will help him destroy evil magic.

"I think it's the genius of Stravinsky, even not having the choreography with only the music," Gustavo Dudamel added.

The Salzburg Festival and the Vienna Philharmonic share a unique bond.

Since the early 1920s, the orchestra has spent its summers in residence in Salzburg, shaping the musical identity of the festival, as Daniel Froschauer, chairman of the Vienna Philharmonic, explained.

"The Salzburg Festival is a very important pillar in our artistic existence. We have met here some of the greatest conductors... like Arturo Toscanini.

"And this is such an incredible, enriching, artistic experience.

"I wake up and think, in the morning I'm playing Bruckner's Fourth Symphony and in the evening I'll perform Così fan tutte. I love to sit by the river Salzach and to enjoy the view of Salzburg. It's everything together," he added.

Gustavo Dudamel said it has been a great journey with the orchestra.

"From my youth to my adult life. I was 26 when I made my debut with the orchestra. They are so open in the process of work. They are such a great instrument. I'm honoured to be part of this incredible instrument," he said.