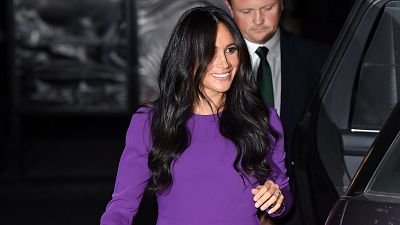 Meghan, Duchess of Sussex, stepped out Tuesday night for the One Young World Summit in London.

The former Meghan Markle donned an elegant purple midi dress and navy pointed stilettos for the opening ceremony of the event at Royal Albert Hall. She wore her hair in bouncy curls with a fashionable middle part.

It was the first public appearance by the duchess since she recently revealed in an ITV documentary she has struggled with the intense media spotlight on her and Prince Harry's relationship.

"It's hard. I don't think anybody could understand that,'' she said. "In all fairness, I had no idea, which probably sounds difficult to understand here, but when I first met my now-husband, my friends were really happy because I was so happy, but my British friend said to me, 'I'm sure he's great, but you shouldn't do it because the British tabloids will destroy your life.'

"And I very naively — I'm an American, we don't have that there. 'What are you talking about, that doesn't make any sense.' I didn't get it. So it's been complicated."

Recently, the royal couple announced lawsuits against British tabloids and have spoken out in strongly worded statements. A source close to the couple has told NBC News they will be taking some "much-needed family time" later this year.

There has even been speculation the two might move with their 5-month-old son, Archie, out of the United Kingdom altogether⁠ ⁠— though that seems unlikely.

The Duchess of Sussex is the vice president of the Queen's Commonwealth Trust, which is partnering with One Young World this year.

According to the Sussex Royal Instagram account, the duchess plans to hold a roundtable discussion with several of the One Young World leaders to "address the issue of gender equity worldwide and how we can all play our part to reach equality for all."

The annual summit aims to bring young leaders from across the world together to "accelerate social impact," according to the website. Attendees participate in four days of speeches, panels, networking and workshops.

The duchess previously attended the summit in 2014 and 2016.

This is the first time the summit has been held in London since 2010, according to the One Young World website.