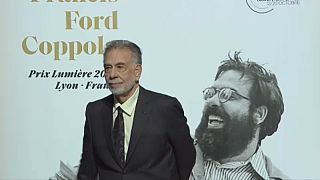 The work of cult US filmmaker Francis Ford Coppola shone brightly for the organisers of the 2019 Lumière festival, which ends on Sunday in Lyon.

“Lumière and its festivalgoers honour one of the greatest living legends in the history of cinema,” declared festival president Bertrand Tavernier and festival director Thierry Frémaux.

“Francis Ford Coppola has constantly probed the art of film, exploring innovative modes of narration and style, while maintaining accomplished forms of film classicism in his absolute quest for independence and freedom of creation.”

Although it seems he was designated as the worthy successor of the Hollywood emperors, Coppola has always remained faithful to the ideals of his youth, incessantly questioning the art of telling and producing stories.

Some great names from world cinema were there to honour him, including South Korean director Bong Joon-ho.

"It's a great honour to be here with him because he's someone who really changed his era and really changed something in the cinema," he told Euronews.

"When you do good stuff, it lives forever, it transcends nationality, it transcends language and they exist in our lives. So I can't understand my life without The Godfather or without Dracula," said Mexican film director and actor Gael Garcia Bernal.

"He's a huge director and on top of that, he's a great man in life," said French actor Nathalie Baye.

The Lumière Prize takes its name from the Lumière brothers, Auguste and Louis, who lived in Lyon where they invented the cinematograph, the first motion picture film camera in the 1890s. The festival and its prizes focus on preserving the memory of the world's cinema.

The Lumière award has been ambitiously described as the Nobel Prize for cinema with previous recipients including Clint Eastwood, Pedro Almodovar, Ken Loach, Milos Forman, Quentin Tarantino and Martin Scorsese.

Just a decade on the festival has established itself as one of the most important, attracting around 185,000 people last year.