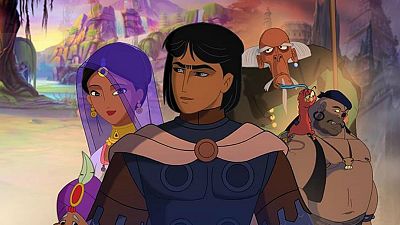 The cartoon feature Al Faris wa Al Amira — or the Knight and the Princess — was showcased at the third edition of the El Gouna Film Festival.

The event in Egypt saw cast members climb to the stage to extended applause worthy of the years it took to make the animated feature.

Those who couldn’t make it for the reception were remembered, including the late famed actress Amina Rizk, who was known for playing the role of the caring mother as she had in this film, and Saeed Saleh, a renowned theatre stage actor in Egypt.

“I am extremely happy with this movie and it was a surprise for me,” said Abdel Rahman Abou Zahra to Euronews on the red carpet, he voiced the part of the sorcerer for the feature 17 years ago, and said he couldn’t remember the name of the film when he was told it would be released this year.

“I recorded my voice when I was a young man,” he exclaimed.

So why did the movie take so long to make? According to the executive producer of the movie, Alabbas Bin Alabbas, it was ground-breaking as the first of its kind from Egypt.

“When you start a project that has no foundation there are challenges at every level,” said Bin Alabbas, who had to put the production of the animated film on hold regularly, to create other traditional TV series, from which he would use its profits to fund his digital dream.

He and his team had to train animators to be able to create a professional standard of visual movement for characters and action-filled battle scenes, with sword fighting and stampeding elephants, which he says included more than two million drawings.

“No one had created an animated film so at every stage there was a challenge, there was discovery, but because we started with a dream and a bold dream, a dream has no boundaries,” he said.

The tale of the film was a classic, of a handsome prince who rescues and falls in love with a beautiful princess from a faraway land, amid heroic adventures and battles of love and war.

Recognisably reminiscent of its ancestor Aladdin released by Disney in 1992, the movie stars an Indian princess with a pet cat, flamboyant and comical genies bound by duty, and a balcony scene where the star-struck lovers sing a song expressing their feelings for one another.

The originality of the film came from its representation of Arabic culture and history, with its lead character inspired by the seventh-century adventurer Mohammed Bin Al-Kassim, who left his home town of Basra in present-day Iraq, to take on the tyrant king Daher with his comrades.

Also adding to its novelty was the mix of language styles, with formal standard Arabic being used for the most part, and the Egyptian dialect practised by the more animated characters such as the bumbling Jinni-duo Bakto and Shamhourish, who elicited regular roars of laughter from the audience with their failed attempts to sabotage the young hero throughout his journey.

Jinni Bakto was voiced by the Egyptian comedy actor Mohamed Henedi, whose recognizable sound could be heard in the Arabic dubbing of ‘The Lion King’ as Timone, and in ‘The Simpsons’ as Homer Simpson.

It was the young prince’s optimism and belief that he can achieve anything which the writer and director of the film wanted to communicate to young audience members through the creation of this movie.

“Nothing is impossible,” said Bilal Al Deek, who faced constant opposition throughout the about 20 years it took to complete, and showcase his animation project.

“There was the perception that we couldn’t do this, but we did it, and we did it well,” he added.

While ‘The Knight and the Princess’ is Egypt’s first animated full feature film, original animated series and films exist in the Middle East and North Africa.

Arabic cartoon series have emerged from countries like Jordan, the home of children’s programs like ‘Adam and Mishmish’, about an adventurous two-year-old boy who travels with his toy while learning about Arabic language, and also ‘Team Hero’, a cartoon series created by a mother of autistic children to raise awareness about intellectual disabilities.

For adults and children alike is ‘Freej’ from the UAE, a 3D-animated cartoon series about four older women facing challenges of modern-day life in Dubai.

The full animated adventure of ‘Bilal: A New Breed of Hero’, co-created by Ayman Jamal in the UAE, tells the story of a boy who rises from slavery. The English language feature won best inspiring movie on Animation day at the 2016 Cannes Film Festival.