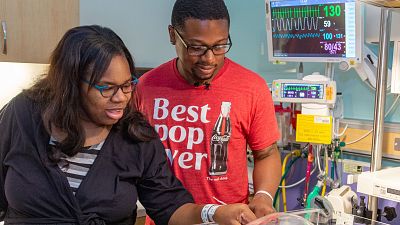 A baby was born on Sept. 11 at 9:11 p.m., weighing in at 9 pounds and 11 ounces in what can only be described as a joyful coincidence on what has otherwise become a sombre day of remembrance.

Little Christina Brown was born at Methodist Le Bonheur Germantown Hospital in Germantown, Tennessee on the 18th anniversary of the 9/11 terror attacks. While many babies are born on Sept. 11, just like every other day, Brown's birth time and vitals made her entrance into the world extra special.

"We had emotions and we felt it," Cametrione Malone-Brown, the baby girl's mother, said, according to a Facebook post from the hospital. "Then 18 years later on that day 9/11, you find triumph; you find a piece of joy from a day that was so drastic and still hurts."

A photo released by the hospital shows the precious baby girl asleep in her hospital crib, wearing a blue bow and already sporting an impressive head of hair.

The Brown family did not immediately respond to a request for an interview, however, Malone-Brown posted on Aug. 27 that she was due in "three weeks or less," putting her due date around Sept. 11.

She was already expecting Christina to be a big baby, since she noted her "Baby Jaws" was 8 pounds and 6 ounces during a doctor's appointment on Aug. 19. But with 1,440 minutes in a day, the fact that Christina was born at 9:11 p.m. makes the odds of being born at that time extra long.

Brown joked that it might just be enough of a crazy coincidence that the Southaven, Mississippi family should buy a lottery ticket. After beating those odds, it doesn't sound like such a bad idea.