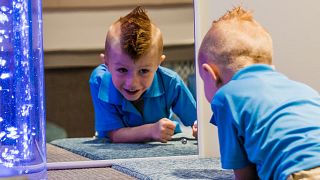 The Pittsburgh International Airport (PIA) has unveiled one of the world's largest, most comprehensive airport sensory spaces, designed for families flying with loved ones on the autism spectrum.

At the heart of the space: a first-of-its kind jet cabin and jetway replica, that enables travelers with sensory issues to get comfortable with the physical layout and space constraints of an actual airplane.

The space, which is entirely sound-proof, features a collection of bubble tubes with calming lights, bathrooms with adult-sized changing tables that can be moved up and down, and private areas in which families can decompress before flights.

Presley, the son of an airport employee, is on the autism spectrum and, his parents say, struggles when it comes to changes in his routine.

When Presley was 2, his parents discovered sensory rooms, like those at Presley's school, made all the difference in the world in calming their son's nerves.

"The difference was like night and day after he went into a sensory room," said Jason Ridge, Presley's dad. "He'd come out of the sensory room and be ready to interact with others."

Seeing the difference a sensory room can make, Jason — who works as a heavy equipment operator at the airport — got the idea to install a sensory room in Pittsburgh's airport.

"I sat down and did my research, then wrote a letter to the airport CEO with my idea," Jason said. "Two weeks later, she called me into her office and said, 'This is going to happen.'"

The decision to open a sensory room, said Christina Cassotis, CEO of the airport, made sense on multiple levels.

"It's incredibly important that we are able to welcome all the passengers here who want to be here and we want to give them the best experience before they get on the airplane," Cassotis said. "We see this as an enormous public service and opportunity. It's going to make things better for families and for their fellow passengers."

Pittsburgh's new sensory space comes as a number of international airports are making an effort to be more welcoming to travelers on the autistic spectrum. Birmingham and Atlanta are among the U.S. airports to recently construct sensory rooms in their airports and similar rooms have been added in Gatwick International Airport near London.

Cassotis is especially proud of the jet cabin replica, which is based on an actual American Airlines cabin, located in PIA's sensory room.

"It was made using all of the materials used in a real jet cabin and has all of the functions featured on an airplane," she said. "It gets kids and adults acclimated."

Cassotis said families can check out Pittsburgh's new sensory room, and take the mock cabin for a test drive, weeks, as many as six months before a flight, by taking advantage of the airport's Pit Pass Program, which enables families to check out the airport, and the sensory room, even on days in which they are not scheduled to fly.

Presley and his family were there this week when the sensory room opened to the public.

"The look on his face was everything," said Jason, adding that Presley especially loved the jet cabin. "He put on his seatbelt right away and was ready to go," Jason said.

Jason and his wife, Sharon, have not yet taken a commercial flight with Presley. But now, thanks to PIA's sensory room, they expect that to change.

"Now maybe we can actually go as a family on a vacation," said Sharon. "A lot of people don't understand how much stress it is on a relationship having a special needs kid. Being able to travel to relieve some of that stress would be huge."

Until they take that first flight, the Rudge family is happy they have been able to help others families in their same position.

"This room is the biggest accomplishment I've ever done in my life," said Jason. "People are going to go on vacations that never thought they could."