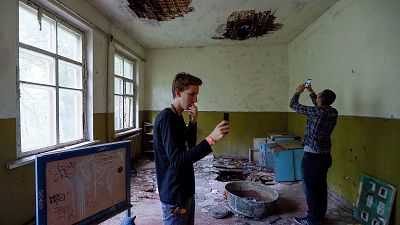 Visitors take pictures at a kindergarten in the abandoned village of Kopachi, near the Chernobyl Nuclear Power Plant, Ukraine on June 2, 2019.   -   Copyright  Valentyn Ogirenko Reuters
By Daniel Arkin  with NBC News Entertainment  •  Updated: 13/06/2019

The creator and writer of the acclaimed HBO miniseries "Chernobyl" chastised tourists for taking selfies — including some that critics found tasteless — at the location of the 1986 nuclear disaster.

"If you visit, please remember that a terrible tragedy occurred there," Craig Mazin tweeted Tuesday night, noting he had seen some of the photos. "Comport yourselves with respect for all who suffered and sacrificed."

The success of the miniseries, a five-part dramatization of the events surrounding the world's worst nuclear accident, has helped inspire a wave of tourism to the site of the former Soviet-era power plant in Ukraine.

At least one Chernobyl tour agency has reported a 40 percent increase in trip bookings since the series debuted on HBO and Sky Atlantic in May, according to Reuters.

Another tour company told Reuters it has seen a 30 percent spike.

Mazin's tweet comes after social media users shared several photos of tourists and influencers posing in front of ruins in the plant workers' city of Pripyat and the 1,000-square-mile area known as the Zone of Exclusion.

Twitter user Bruno Zupan on Tuesday posted a round-up of Instagram screenshots. In perhaps the most provocative image, a topless woman wears a half-zipped hazmat suit that shows her thong underwear.

The World Health Organization's cancer research arm has suggested some 9,000 people will die due to Chernobyl-linked cancer and leukaemia. But the eventual death toll is subject to dispute.

The uproar over the Chernobyl-set photos recalls similar recent flashpoints over tourism at locations considered sensitive or sacred.

Officials at the Auschwitz Memorial in Polandtweeted a reminder to visitors in March, telling them to avoid taking light-hearted photos at the Nazi concentration camp where over one million people were killed.

"There are better places to learn how to walk on a balance beam than the site which symbolizes deportation of hundreds of thousands to their deaths," the museum tweeted, referring to train tracks at the camp.