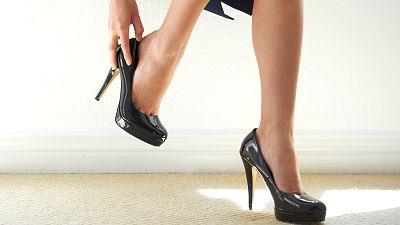 Yumi Ishikawa tweeted about being forced to wear heels for a part-time job at a funeral parlor.   -   Copyright  Getty Images
By Lindsay Lowe  with TODAY Lifestyle  •  Updated: 06/06/2019

Flats for the win!

Yumi Ishikawa, an actress and writer, launched a Change.org petition urging her government to ban companies from requiring high heels in the workplace.

Women in Japan are often pressured or even forced to wear heels at work, according to Ishikawa.

Back in January, she tweeted about being forced to wear heels for a part-time job at a funeral parlor, according to a report from CNBC.

When that tweet went viral, racking up more than 100,000 likes and retweets, Ishikawa realized a lot of other women shared her views.

So, building on the success of her viral tweet, she launched a social media campaign called the #KuToo movement. That's a pun on the Japanese words for both "shoes" and "pain," as well as a reference to the #MeToo movement, according to a translation from CNBC.

"After work, everyone changes into sneakers or flats," Ishikawa wrote in her petition.

"It's hard to move, you can't run and your feet hurt (in heels)," she added. "All because of manners."

Ishikawa also said that high heels often cause blisters and muscle strain, and pointed out that men don't face the same shoe requirements on the job, whether unspoken or spelled out in a workplace dress code.

Her petition has garnered more than 19,000 signatures, and she recently submitted it to Japan's ministry of health, where it is currently under review.

Ishikawa's fight to wear flats at work echoes the story of a British temp worker, Nicola Thorp, who was sent home when she refused to wear heels at her receptionist job in 2016.

Thorp started a petition urging the British government to make it illegal for companies to require women to wear heels.

"As women, I think we have become used to the fact that society pressures us to change the way we look," Thorp wrote in an essay for TODAY Style.

"Women, who may previously not have questioned the intentions of an employer, have been empowered by the stories of others, have spoken out about their own experiences of discrimination and have challenged their employers," she wrote. "After all, if you don't make changes, things will just stay the same."

More than 150,000 people signed Thorp's petition, but the British government ultimately rejected a bill that would have banned employers from requiring high heels at work in the U.K.

However, as the Japanese government considers her petition, Ishikawa is hoping her efforts will bring about change.

Her ultimate goal? To "make it easier for everyone to work," she wrote in her petition, "creating a working environment free from unnecessary burdens."