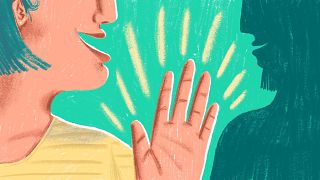 Skip the stock questions (what do you do, where do you live, etc.), and ask a question that will make your conversation partner think.   -   Copyright  Julia Barnes for NBC News
By Sarah DiGiulio  with NBC News Better  •  Updated: 06/06/2019

Research from a group of social psychologists would suggest the answer to all of those questions would be yes.

The researchers led a workshop for individuals in the community to learn how to get better at talking to strangers, and asked participants about those conversations — both before and after they happened.

The results showed that both prior to and after having the conversation, people thought they would find their partners interesting, explains study author Gillian Sandstrom, PhD, senior lecturer in the department of psychology at University of Essex. But, they don't think that their partner will find them as interesting in return, she tells NBC News BETTER. "And nearly everyone says the conversations actually went way better than they thought."

The results were published in the journal "Psychological Science" in the fall and presented at the Society for Personality and Social Psychology Annual Convention in February.

The individuals who attended, elected to attend the event, so the sample was a somewhat unique group in that they were motivated to get better at conversations from the get-go, Sandstrom notes.

But the data would suggest that even if conversations feel awkward, they're probably going better than you think, she says. Also, maybe we can get a lot better at connecting with people we don't know, be it a new coworker, a friend of a friend, or the grocery store cashier.

Here's what Sandstrom and others want you to know about how to talk to people you don't know — and why it can actually do you a lot of good.

Talking to someone you don't know is uncharted territory. Compared with talking to your partner, your best friend, or your mom, the unknowns make it challenging and potentially intimidating, Sandstrom says. "We go into conversations thinking all these awful things can happen."

Context matters, too, Georgie Nightingall, a conversation coach and founder of Trigger Conversations, a London-based organization dedicated to teaching people how to have better and more meaningful conversations, tells NBC BETTER. There are unwritten social norms in every context, which we tend to want to follow, but we may not always be sure of. Will revealing a certain fact about ourselves make us appear more credible or likable? Will being too bold impress or turn someone off?

"We want to be liked, or at least accepted by other people," she says. "In order to not break these norms, we sometimes act like we're treading on eggshells."

We're social beings. Even uncomfortable conversations are good for our wellbeing.

But, despite the awkward pauses, the missteps, and the unsure footing, talking to new people (even complete strangers we likely won't see again) is good for us. Studies show that even minimal social interactions (say, chatting with that stranger on the train) boosts mood, for example.

In one study, researchers recruited individuals at random as they entered a crowded coffee shop downtown Vancouver, directing some to try to have a conversation with the barista and others to be as efficient as possible in their coffee fetching. The former group reported leaving the coffee shop in a better mood and having a better sense of belonging in their community compared with the efficient group. (The study was published in 2013 in the journal "Social Psychological and Personality Science".)

It's impossible to know from the data how this mood-boosting strategy compares to other methods or how long the effect would last, says study co-author Elizabeth Dunn, PhD, professor of psychology at University of British Columbia (Sandstrom was the other co-author). "But it's a low-hanging fruit." The conversations, Dunn adds: "they're value-adds."

People want to get the real you so they can express the real them.

In terms of how much differences in personality traits affect these assertions, Sandstrom, Nightingall, Dunn, and others say, less than you'd probably think. "Both extroverts and introverts are social beings," Nightingall says.

Sandstrom adds that people who are more introverted tend to be more worried about how conversations will go ahead of time compared with extroverts. But those differences go away when people report the benefits they get out of a conversation (according to what she and colleagues found in the aforementioned "Psychological Science" paper published last year). That research also looked at other personality differences besides introversion. "Things like self-esteem and rejection sensitivity didn't matter," Sandstrom says.

How to actually be better at talking to strangers

Whether it's approaching someone at a networking event, engaging a friend of a friend you've never met before at a party, or sharing a kind word with a stranger on the elevator (yep, we went there), here are some pointers:

And don't be afraid to talk to someone who seems different from you, adds Juliana Schroeder, PhD, assistant professor at the Haas School of Business at University of California Berkeley. (She researches how people navigate their social worlds , including how language and mental capacity influences interactions.) "When you have to talk with someone different from you, that can be the most enlightening and interesting experience."

Ask questions. Is the person wearing an article of clothing that's noteworthy? Why did they decide to come to whatever event you're both at? Research actually suggests that people who ask more questions are better liked by their conversation partners than people who ask fewer questions. A question can either kick off a conversation or keep it going, Sandstrom says.

3. Don't be afraid to go off-script

Skip the stock questions (what do you do, where do you live, etc.), and ask a question that will make your conversation partner think, which is engaging, Nightingall says. Or start with a statement: "This painting really confuses me" or "I can't believe how crowded the train is today." Statements are invitations to share curiosities, Nightingall says.

And whether you're asking a question, replying, or making a statement, be authentic, she adds. "People want to get the real you so they can express the real them."

4. Give someone a compliment

It shifts the focus to the other person and should make them feel good, Sandstrom explains. When it comes to our anxieties about having conversations with people we don't know, we tend to be in our heads a lot, overthinking what we're doing wrong or what we could do wrong, she explains. Focusing the attention on the other person in those moments can help us get past those awkward spots, she says.

5. Talk about something you both have in common

"We tend to overestimate how different people are from one another and how different they are from us, " Sandstrom says. "In reality, you probably have lots in common, but you just don't know what that is yet."

6. Have more conversations with people you don't know

The more you have, the more likely that you're going to have good conversations, Sandstrom says. You get better at asking better questions, and answering with more interesting responses. "There's some skill, but its as much confidence that come from just doing it more often," she says.

We fear social rejection — that the person won't respond positively or will ignore us, Schroeder says. Research shows the opposite, however, that people nearly always are willing to engage in a conversation when prompted by someone else. (Our fear assumptions fail to take into account the social norms of politeness, Schroeder says.)

7. Don't let the awkward moments trip you up

Sandstrom says in her experience, she would describe the stages of having a conversation with a stranger as follows: First, they look at you as if asking, "Do I know you?" Then there's recognition they don't know you. Then it's, "Wait, are you a weirdo?" Then they get past all of that and realize you're just being friendly.

"You have to be OK that it might be awkward for a bit," Sandstrom says. "But if you keep going, hopefully you'll get to that stage where you're having a real conversation."