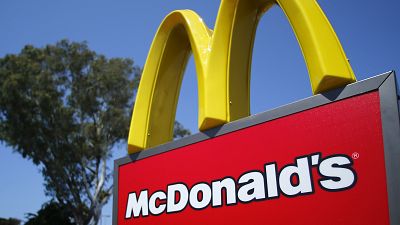 The world's smallest McDonald's recently opened for business — but not just anyone will be allowed in.

The tiny structure, which is located in Sweden, was designed by Nordic creative agency NORD DDB, which shared a videoshowing the making of the international fast-food chain's latest branch. Outfitted with an al fresco patio, sleek wood paneling and not just one but two drive-thru windows, the mini-Mickey D's actually has "room for thousands of important guests."

"How is that possible?" one might wonder. Well, it's because this restaurant is truly the bee's knees.

The McHive, as its aptly been called, is a fully functioning beehive crafted as an homage to McDonald's franchise locations.

According to the creative agency behind the buzzy project, franchise owners across Sweden have begun installing bee hives on the roofs of their restaurants, as well as replacing property grass patches with flowers and plants that behoove member of any hive.

It's all part of a global initiative to save the honey bee population that is declining at a rapid rate from a variety of factors, including the overuse of pesticides and not having enough wildflowers to pollinate.

On Tuesday, the McHive was sold at auction — we hope it came with a beekeeper's suit! — during a fundraiser for Ronald McDonald House charities.

A member of the McDonald's press team did not immediately respond to TODAY Food's inquiry about whether the McHive might buzz over to the U.S.

As for where the tiniest McDonald's is for actual humans, it's hard to say. But folks on social media have purportedly spotted a few that fit the bill.

One looks quite narrow.

Another isn't much larger than the actual drive-thru menu.

And then there's the wee, well-designed kiosk type of Micky D's.

If you're looking to super-size your next fast-food experience, the largest McDonald's in the U.S., according to Business Insider, is in Orlando, Florida, and it may be as mesmerizing to Big Mac fans as Disney World itself.

Its menu has everything from the traditional burger and fries, to hard-to-find items like the famous McPizza, waffles, pasta and even a full-on dessert bar. It's also three stories tall, has an enormous PlayPlace with arcade games and even a fish tank.