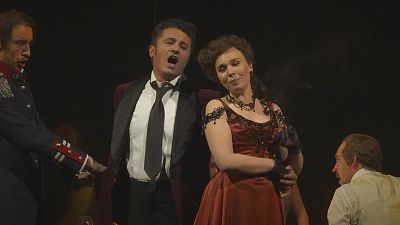 Childish, narcissistic or a femme fatale? 'Manon' is one of the most dazzling figures in the opera world, and now she is being played by the talented young singer Elsa Dreisig in a production by Floris Visser.

It is a career jump for 27-year-old Elsa Dreisig. For the first time, the Danish-French soprano and 2016 Operalia-winner is performing in Jules Massenet’s 'Manon' at the Zurich Opera House, playing the title character.

She is performing alongside Polish star tenor Piotr Beczala, who plays the Chevalier des Grieux.

Speaking to Euronews, Dreisig said it is a vocal and acting challenge.

She said: "I experiment with it my way, like a painter taking a canvas and trying to create his artwork. For me, it's the same. I really wanted to find out who would come out of me. At 27-years-old, at this time of my life, which Manon is going to come out?"

The opera is based on the controversial French novel 'Manon Lescaut' (L'Histoire du chevalier des Grieux et de Manon Lescaut) by Abbé Prévost, which was first published in 1731, before it was promptly banned.

The story follows two young lovers, the Chevalier des Grieux, and Manon Lescaut, who run away to Paris together. But, when they start to run out of money and Des Grieux can no longer satisfy Manon's luxurious tastes, Manon leaves him for a richer man in an attempt to climb the social ladder.

Since launching at the Opéra-Comique in Paris in January 1884, the opera is frequently performed in venues all around the world.

But, Elsa Dreisig promises to put a new spin on the character of Manon.

“Each act is different. The first one is still very infantile, naive and light, but little by little the drama advances and one has to feel that throughout the character evolving. And then suddenly there are moments where you not only have to find drama in your voice, but also have to sing very high coloraturas," she said.

It is all part of the vision of Dutch stage director Floris Visser, whose minimalistic production matches well with Massenet's romantic masterpiece, but also poses a question about Manon's mental state.

“There is one suitcase left in the train station - and she takes it. There is no moral boundary for her not to look in the suitcase. And that makes her a typical borderliner. It’s those kinds of things, like the lack of morale. The more and more the evening develops the more and more you see that this behaviour is not that of somebody who is just naive. It’s the behaviour of somebody who is actually ill.”

Dreisig's co-performer Piotr Beczala compared Manon with the title character from the classic French opera 'Carmen', a femme fatale who seduces men and leads them astray.

"[She is] a young girl who is different and doesn’t fit in within society. She’s far too curious for her time.”

But, a key part of the performance is the on-stage relationship between Dreisig and Beczala, who took home the award for Best Male Singer at the International Opera Awards in London in 2018.

“It’s almost a devilish seduction. And I try to play it like that, my despair is so huge. Actually, he’s lost from the beginning.”

_You can buy tickets to see 'Manon' through the Zurich Opera House's website._