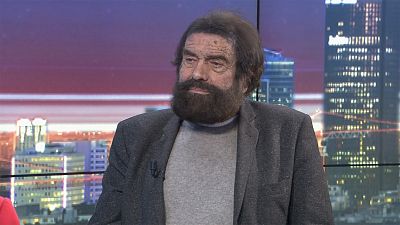 French intellectual, writer, and peace activist Marek Halter spoke to Euronews' Isabelle Kumar about the challenges he faced writing his memoirs and how his efforts for peace in the Middle East are far from over.

Of Polish origin, Halter recounted the time he surprised Yasser Arafat with a visit, saying the Palestinian political leader didn't understand why "a pro-Israel Jew" had come to see him.

The writer later tried to organise a meeting between former President of Israel Shimon Peres and Arafat at his home in Paris, which he said started negotiations that led to the Oslo Accords.

He is still striving to negotiate peace between Israelis and Palestinians.

"I have a project: I think that if I succeed in doing it, there will be peace in the Middle East," Halter said.

In his eyes, women are the key to achieving peace. In a new project, he wants to bring together 300,000 women, both Palestinian and Israeli, to march to Jerusalem together with a sign that reads: "Shalom, Salam. Peace."

"No one will dare shoot at this crowd," Halter said.

"I guarantee you that a year later, we will no longer be talking about the Israeli-Palestinian conflict."

On the subject of what drove him to pen his memoirs, he cited his wife's diagnosis with Parkinson's disease.

"I made a pact with death," Halter said. "'You leave Clara alone while I finish my memories,' because I liked reading her passages."

He explained to Kumar that writing the book was difficult for him because "when you decide to write your memoirs, it means you accept the idea that life is already behind you."

Finally, his wife passed away when he finished writing the book.

"I only had one sentence left to write," Halter concluded, "the last sentence of my book: 'Clara is dead.'"

Future wars will be waged with robots. But so might future peace ǀ View