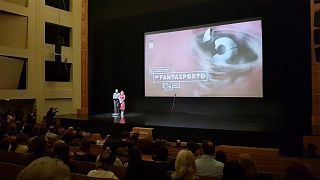 Already in its 39th edition, Fantasporto, the international film festival of Porto, in Portugal, had dozens of films from different countries, with Asian film production drawing a good part of the attention, as in past years.

The first prize in the Fantastic Film section went to a first-timer: “Last Sunrise” is the first feature film by Chinese-American director Wen Ren and one of the first sci-fi movies produced in China.

The film tries to imagine what happens if the Sun implodes. The two main characters have to cross the whole country looking for a place where they can survive safely.

"We were given the challenge of making a science fiction road trip, a character-driven story shot in 14. Days," director Wen Ren said in an interview.

"We travelled 1,600 km across China and we did it in -26 degrees Celsius. Honestly, everyone had a very tough time to make it happen," he added.

"In Fabric" wins Special Prize of the Jury

"There’s been some horror, some science fiction, quite a lot of apocalyptic cinema, films involving time paradoxes and also just some stuff that was uncategoriseably strange and odd," said Anton Bitel, film critic and member of the jury.

"Foremost among those was Peter Strickland’s "In Fabric". Superficially it’s a film about a haunted or cursed dress, but I don’t think that’s quite doing justice to the odd fetishistic roads Peter Strickland is taking us," he added.

"In Fabric" won the Special Prize of the Jury, after having collected awards and nominations in at least nine other festivals. It should premiere in the commercial circuit this summer.