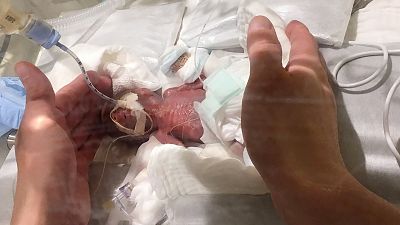 TOPSHOT - This undated handout released by Japan's Keio University Hospital on February 27, 2019 shows a five-day-old baby, who weighed 268 grams at birth, at the hospital in Tokyo. - A baby born in Tokyo weighing less than 300 grams (10 ounces) has gone   -   Copyright  Keio University Hospital via AFP - Getty Images
By Meghan Holohan  with TODAY Lifestyle  •  Updated: 01/03/2019

He's not even a year old but already he's a record-breaker. This baby boy, who weighed 9.45 ounces when he was born in a Tokyo hospital, has the distinction of being the world's tiniest living baby boy, according to a report by Reuters.

"I wasn't sure he could survive," the baby's mom told Reuters.

In August, his mom gave birth to him via Caesarean-section. He had stopped developing and doctors worried that he would not live. After his birth, he stayed in the neonatal intensive care unit until Feb. 20. When he left the hospital, he weighed more than 7 pounds (3.2 kilograms).

"I am grateful that he has grown this big," his mom said to Reuters.

Lula and Bolsonaro supporters rally on eve of Sunday's election