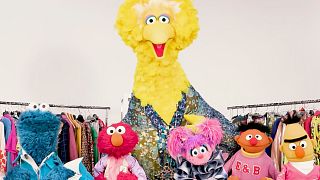 It's hard to believe, but Sesame Street turns 50 years old later this year! And Jim Henson's lovable Muppets are celebrating in style.

To help mark their golden anniversary, everyone's favorite Sesame Street residents teamed up with InStyle magazine for a cover-worthy makeover. The magazine's style-savvy crew even recruited the help of some of the industry's hottest designers to give the iconic characters glamorous new looks!

In a simply adorable video, the Sesame Street crew visits the InStyle offices to enlist the help of editor-in-chief Laura Brown, and the group has plenty of fun raiding the magazine's fashion closet. During the fashion fun, Cookie Monster even stumbles upon a pair of spotted shoes resembling his favorite snack.

When all was said and done, the lovable monster ended up selecting a futuristic, shiny azure jacket, courtesy of designer Rosie Assoulin, for his cover moment.

Elmo got outfitted in a classic Opening Ceremony track suit. The brand's designer, Humberto Leon, told InStyle that he's always loved "Sesame Street" for its forward-thinking attitude. "Sesame Street has always been ahead of the curve," he said. "My first memory was watching Buffy Sainte-Marie teaching Big Bird about breastfeeding. The show has an ethos that mirrors our thoughts on honesty and transparency."

Abby Cadabby was treated to a custom Marc Jacobs dress straight off the designer's Spring 2019 runway, and looked super chic in the flannel, ruffled design.

Isaac Mizrahi helped Bert and Ernie trade in their '70s-style stripes for modern pink varsity sweaters. Mizrahi told InStyle the duo's signature sweaters were his favorite memory of Sesame Street fashion. "I adore how, like the characters' relationship, the sweaters complement each other so well. Although I gave them a slightly more modern look, I kept the distinguishing features — Bert's white turtleneck and Ernie's yellow cuffs," he said.

The thought of giving the Sesame Street crew some glam makeovers is pretty brilliant, considering the fact that most of the show's characters haven't really changed their outfits since the show premiered in 1969.

From the looks of it, the lovable puppets enjoyed getting all dolled up for a change, but they aren't about to go all Hollywood on us. These chic new looks were a one-time deal for a series of digital InStyle covers, and the characters changed right back into their classic clothes (or lack thereof, in Cookie Monster's case) afterward.