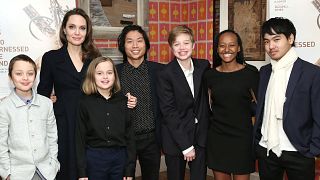 Angelina Jolie is making sure her kids fully enjoy their visit to New York City!

Following last week's visit to the Museum of Modern Art with four of her children (their dad is her ex-husband, Brad Pitt), Jolie took the whole bunch to a screening of Netflix's upcoming film, "The Boy Who Harnessed the Wind."

The rare group outing gave us all a chance to gasp at how fast these kids are growing up!

The actress interviewed the movie's writer, director and star, Chiwetel Ejiofor, and William Kamkwamba, whose memoir the film is based on, up on stage at the screening.

But it hasn't been all screenings for the family; the New York Post reports that she took Maddox on a tour of New York University and went out shopping with several of the other children. The paper also said the gang checked out "Hamilton" on Saturday night, enjoyed an escape room in Harlem — and that Jolie even rode the subway with Knox and Pax.

Nice to see they're all enjoying family time!