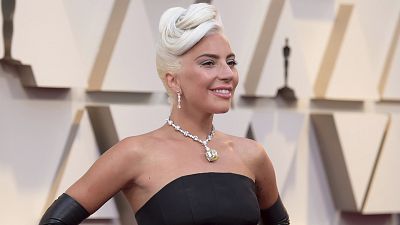 The 2019 Oscars red carpet was packed with gorgeous gowns— but this year, it was the accessories and details that really turned heads.

Lady Gaga, who took home the award for best song for the hit "Shallow" from "A Star Is Born," wowed onlookers by wearing a Tiffany & Co. yellow diamond necklace worth $30 million. Yes, you read that right! The stunning piece featured a gigantic diamond that's reportedly one of the largest yellow diamonds in the world, according to a press release.

Not only is the 141-year-old piece worth millions, it's also the first time in history it's been worn on an awards show red carpet. However, it's not the precious necklace's first adventure in Hollywood — Oscar-winner Audrey Hepburn is said to have worn the same yellow diamond in a "Breakfast at Tiffany's" publicity photo shoot.

"Aquaman" star Jason Momoa was wearing a pink velvet Fendi suit as he walked the red carpet with his wife, Lisa Bonet. As pretty as the pair looked together, fans couldn't help gushing over the matching pink velvet scrunchie Momoa wore around his wrist.

In Glenn Close's case, it was the details of her glittery Caroline Herrera gown that dazzled onlookers. The long-sleeved dress, which included a lengthy cape, contained a whopping 4 million beads.

If Close needed help navigating the red carpet, who could blame her? She told E!'s Ryan Seacrest her sparkly ensemble weighed 42 pounds.

"Black Panther" production designer Hannah Beachler made history Sunday when she became the first black woman to win an Oscar in her category. Beachler paired her gorgeous red satin gown with an eye-catching piece of jewelry that stretched from ear to ear in an elegant arc over her nose.

Director Spike Lee, who picked up an Oscar for co-writing the screenplay for his movie "BlacKKKlansman," wore a purple Ozwald Boateng suit with gold custom Jordan sneakers. He paired the look with a custom-made Amedeo Scognamiglio gold necklace shaped like the symbol Prince adopted as his name.

Lee also wore the same pair of gold "Love" and "Hate" knuckle rings he wore in his 1989 film "Do the Right Thing."

Ashely Graham updated the ballerina look by wearing her hair pulled back and parted down the middle. And once she turned around, onlookers saw several pretty hair bows adorning her neat bun.