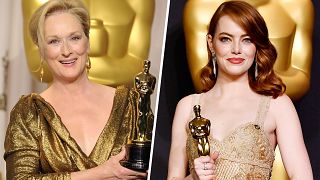 Is gold a lucky color at the Oscars? One can certainly make the case.

Emma Stone's win for "La La Land" at the 2017 Academy Awards — and the fringed Givenchy gown she wore to the ceremony — lent further evidence to the theory that wearing gold to the awards ceremony equals Oscar gold.

Here are 14 additional actresses who further prove that hypothesis.

In 1966, Julie Christie took home the Oscar for best actress in a very mod gold dress with a high-collar neckline. She paired the look with gold statement earrings and a gold belt for a monochromatic look that matched her shiny new award!

Meryl Streep won her second Oscar in 1983 and wore a glamorous gold caftan for the event. The long-sleeved gown featured embroidery and sequins for added shine.

RELATED:See the best-dressed stars from the Oscars red carpet

Dame Judi Dench won the award for best supporting actress for her role in "Shakespeare in Love." The star stepped onto the stage in a cream, pleated gown with a gold embroidered jacket.

The best supporting actress award went to Jennifer Connelly in 2002 for her work in "A Beautiful Mind." But check out her beautiful dress! The actress chose a matte gold dress with tiered ruffles at the bottom and paired the look with a light gold scarf.

Charlize Theron was recognized as the best actress of the year for her work in "Monster," but she looked more like a golden goddess on the red carpet. Theron opted for a body-hugging Gucci gown in a shimmering light gold that brought her good luck.

RELATED: The 20 greatest Oscar dresses from the last 20 years

Cate Blanchett wore a taffeta gown in a bright goldenrod hue for the 2005 Oscars, and it seemed to serve her well! The actress took home the award for best supporting actress for playing Katharine Hepburn in "The Aviator."

The vintage Christian Dior gown worn by Reese Witherspoon to the 2006 Oscars technically could be considered rose gold, but we'll count it anyway because it's just so darn beautiful!

Helen Mirren won the best actress trophy in 2007 for playing Queen Elizabeth II in "The Queen," and there's no color more fit for royalty than pure gold. The star accepted her award in a Christian Lacroix gown with a gold pattern on the skirt and an intricately embellished gold bodice.

That same year, Jennifer Hudson won best supporting actress for her role in "Dreamgirls." The actress and musician may have worn a simple brown dress to accept her award, but when it came time to pose with her statue she changed into an opulent gold gown with stunning embellishments.

In 2010, Sandra Bullock rocked a liquid metallic Marchesa gown that appeared good as gold in some light. It was the perfect choice for the best actress winner who scored big for her role in "The Blind Side."

RELATED: See the hottest trends from the Oscars red carpet

Streep nailed it once again in a gold Lanvin wrap dress at the 2012 Oscars. The iconic actress took home her third Academy award for playing Margaret Thatcher in "The Iron Lady."

The same year, Octavia Spencer went with an intricately beaded Tadashi Shoji gown — and all that sparkle seemed to bring her good luck! The star won best supporting actress for playing Minny Jackson in "The Help."

Blanchett won her second Oscar for her role in "Blue Jasmine" and accepted the award looking like an ethereal princess in this champagne-colored Armani Prive gown.

The stunning Swedish actress stepped onto the scene and was instantly a style star, so it's no surprise her Louis Vuitton gown was one of our favorites from the 2016 Oscars. And it's golden-yellow hue is even further proof that the power of this winning color is undeniable.