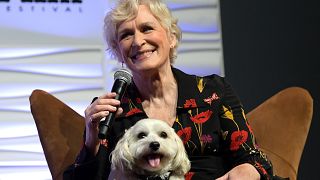 Glenn Close brought the most adorable date to an awards show we've ever seen ... her dog.

The 71-year-old actress, who's been nominated for numerous awards (including an Oscar) for her role in "The Wife," showed up at Saturday's Independent Spirit Awards accompanied by the adorable Pip.

While Close stunned in a metallic pink pantsuit, Pip rocked his own white fur.

She shared a video of the duo's car ride to the ceremony, accompanied by Close's daughter, Annie Starke.

Close and her Havanese pup arrived in style.

Sir Pippin of Beanfield, as he's known to his 6,000 Instagram followers, even accompanied Close on stage as she accepted her award for Best Female Lead.

"He's my date," said Close, as Pip adorably rolled around on his back on stage.

"What's better than that? I brought him up for this very reason," said Close, while the audience laughed. "It's called 'in the moment.'"

We'll just have to wait and see if Pip joins Close for tonight's Oscars!