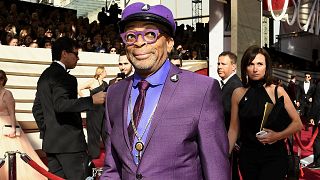 The director of the Oscar-nominated "BlacKkKlansman"arrived on the red carpet in a purple suit made by Ozwald Boateng that featured a matching hat and glasses in an homage to Prince, who died at 57 in 2016.

Lee, 61, also wore a chunky necklace made of diamond, gold and opal, featuring the famous symbol that Prince used in place of his name for a portion of his career.

"I Know In My Hearts Of (Hearts) My Brother Prince Is Watching Tonight, Singin' 'IT'S GONNA BE A BEAUTIFUL NIGHT,''' Lee wrote on Instagram.

Making the outfit complete was a pair of specially-made gold Nikes for the occasion. The man who once played the fictional Mars Blackmon in Nike commercials with Michael Jordan had the special pair of Jordans designed by Tinker Hatfield and commissioned by Jordan himself, according to The New York Times.

The director also sported the famous "Love" and "Hate" rings worn by a character in his 1989 classic "Do The Right Thing."

Lee was hoping to have a night at the Oscars like Prince did in 1985, when the music legend took home an Academy Award for best original song score for "Purple Rain."

The two first became friends in the 1980s and worked together on various projects, which included Lee directing the video for Prince's "Money Don't Matter 2 Night" video. Lee also used Prince's version of the spiritual song "Mary Don't You Weep" in "BlacKkKlansman."