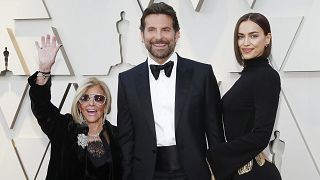 The only thing better than getting to tearfully thank your mother after winning an Oscar is to have her sitting just a few feet away.

Regina King experienced that special moment at Sunday night's 91st annual Academy Awards when she took home the best supporting actress award for her performance in "If Beale Street Could Talk" with her mother, Gloria King, beaming in the audience.

"Mom, I love you so much. Thank you for teaching me that God is always leaning, always has been leaning in my direction,'' King said in her emotional acceptance speech.

Gloria King had another special moment when one of her daughter's fellow nominees for the award, Amy Adams, came over to give her a hug after Regina earned her first Oscar.

Adams knows all about that close bond with family considering she also brought her mother, Kathryn, as well as her sisters, Julie and Anna, as her dates to the ceremony.

King and Adams were two of several stars to bring a parent or family member to the special night.

Bradley Cooper, whose directorial debut, "A Star is Born," was nominated for eight Oscars, also brought his mom, Gloria Campano.

She has become a regular award show date for Cooper, joining him at last month's Screen Actors Guild Awards and previously accompanying him to the 2013 Academy Awards. Cooper was also joined on Sunday night by his longtime partner, Irina Shayk.

Oscar winner Charlize Theron also brought her mother, Gerda Maritz, whom she has often spoke of as a guiding force in her life as she helps co-parent Theron's two young children.

Michael B. Jordan made it a special night with his mother, Donna Jordan. The "Black Panther"star also brought her to the NAACP Image Awards last year.

Cuaron wasn't the only member of "Roma" to make it a family affair, as best actress nominee Yalitza Aparicio took her mother. Aparicio, who had no previous acting experience before "Roma," celebrated her first Oscar nomination with the woman who raised her in Oaxaca, Mexico.

"Can You Ever Forgive Me?" star Richard E. Grant, nominated in the best supporting actor category, brought his daughter, Olivia.

Actresses Emily and Zooey Deschanel made it a sisters' night out at the Oscars, accompanying their father, Caleb Deschanel, who was nominated for best cinematography for "Never Look Away," and their mother, Mary Jo Deschanel.