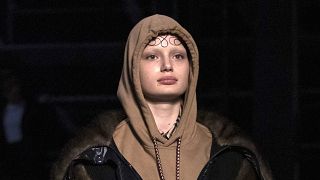 This Feb. 17, 2019 photo shows a model wearing a creation by Burberry at the Autumn/Winter 2019 fashion week runway show in London. The chief executive and chief creative officer of luxury powerhouse Burberry have apologized for putting a hoodie with stri   -   Copyright  Vianney Le Caer AP
By Drew Weisholtz  with TODAY Lifestyle  •  Updated: 20/02/2019

Burberry is the latest brand name to land in hot water over a questionable accessory.

The retailer has apologized for featuring a hoodie with a noose-like detail around the neck during its show at London Fashion Week on Feb 17.

The company has pulled the piece from its collection after model Liz Kennedy, who wore the hoodie in the show, voiced her displeasure in an Instagram post.

"Suicide is not fashion," Kennedy wrote in a lengthy post. "It is not glamorous nor edgy and since this show is dedicated to the youth expressing their voice, here I go."

Kennedy called out Burberry for being oblivious to what the noose represented.

"How could anyone overlook this and think it would be okay to do this especially in a line dedicated to young girls and youth. The impressionable youth. Not to mention the rising suicide rates world wide. Let's not forget about the horrifying history of lynching either.

"There are hundreds of ways to tie a rope and they chose to tie it like a noose completely ignoring the fact that it was hanging around a neck. A massive brand like Burberry who is typically considered commercial and classy should not have overlooked such an obvious resemblance. I left my fitting extremely triggered after seeing this look."

In the aftermath of Kennedy's comments, Burberry reacted swiftly.

"We are deeply sorry for the distress caused by one of the products that featured in our A/W 2019 runway collection Tempest," CEO Marco Gobbetti said. "I called Ms. Kennedy to apologise as soon as I became aware of this on Monday and we immediately removed the product and all images that featured it.

"Though the design was inspired by the marine theme that ran throughout the collection, it was insensitive and we made a mistake. The experience Ms. Kennedy describes does not reflect who we are and our values. We will reflect on this, learn from it and put in place all necessary actions to ensure it does not happen again."

"I am so deeply sorry for the distress that has been caused as a result of one of the pieces in my show on Sunday" he said. "While the design was inspired by a nautical theme, I (realize) that it was insensitive. It was never my intention to upset anyone. It does not reflect my values nor Burberry's and we have removed it from the collection. I will make sure that this does not happen again."

Burberry's controversy follows in the footsteps of other incidents that have recently rocked the fashion industry. Katy Perry was called out just last week after shoes in her collection were accused of appearing like blackface.

Earlier this month, Gucci endured similar criticism over a sweater it was selling and late last year Prada apologized after it was accused of featuring racist imagery on a variety of its products.

If you or someone you know is at risk of suicide please call the U.S. National Suicide Prevention Lifelineat 800-273-8255, text TALK to 741741 or go to SpeakingOfSuicide.com/resources for more additional resources.