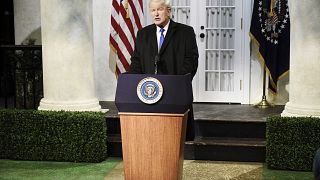 Baldwin reprised his role impersonating the president for SNL's cold open, mimicking the press conference that Trump had given earlier in the week to declare a national emergency in an effort to gain funding for a border wall between Mexico and the U.S.

Trump did not seem to appreciate the humor in the sketch.

"Nothing funny about tired Saturday Night Live on Fake News NBC! Question is, how do the Networks get away with these total Republican hit jobs without retribution? Likewise for many other shows? Very unfair and should be looked into. This is the real Collusion!" Trump tweeted Sunday.

He followed with a second tweet: "THE RIGGED AND CORRUPT MEDIA IS THE ENEMY OF THE PEOPLE!"

"I wonder if a sitting President exhorting his followers that my role in a TV comedy qualifies me as an enemy of the people constitutes a threat to my safety and that of my family?" Baldwin asked.

Baldwin has played Trump on "SNL" since Trump's 2016 presidential campaign. In Saturday's cold open, he poked fun at Trump's reaction to reporters at press conferences, his politics experience and the recently released results of the president's health exam.

On the intended subject of Trump's real press conference, Baldwin's Trump declared: "We need wall. Wall works. Wall makes safe. You not have to be smart to understand. In fact, it's even easier to understand if you're not that smart."

"You can all see why I gotta fake this national emergency, right?" Baldwin said. "I have to because I want to. It's really simple."

Trump's emergency may have laid the groundwork for impeachment ǀ View