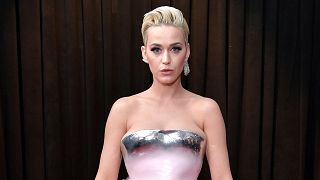 Katy Perry is known for her offbeat fashion sense, and infuses that irreverent point of view in her shoe line. But it appears she may have crossed a line this time.

The pop star's brand, Katy Perry Collections, has yanked a pair of its shoes because of comparisons to blackface.

The Rue Face Slip-On Loafers and the high-heeled Ora Face Block Heel Sandal are being removed from shelves and taken off the company's website. They were available in either black or beige and sold for $129.

The products, which feature blue eyes, triangles noses and red lips on a black background, has come under intense scrutiny on social media.

"The Rue and The Ora were part of a collection that was released last summer in nine different colorways (black, blue, gold, graphite, lead, nude, pink, red, silver) and envisioned as a nod to modern art and surrealism," Perry said in a statement released in conjunction with apparel company Global Brands Group. "I was saddened when it was brought to my attention that it was being compared to painful images reminiscent of blackface. Our intention was never to inflict any pain. We have immediately removed them from http://katyperrycollections.com."

The controversy comes less than a week after Gucci found itself in hot water for selling sweaters that looked like blackface and has been met with swift condemnation online.

"@katyperry are you actually serious right now?! blackface on a SHOE?? what is WRONG with you," wrote one person on Twitter.

Not everyone, though, agrees that the shoes are racist.

"Ok listen, this is a major REACH!!!!" wrote one Twitter user in defense of Perry. "Your shoes are not blackface! Actually reminds me of the 'Wink' slides. If you have extra i will happily take a pair in both colors."

This is not the first time the "Firework" singer has come under fire for a fashion choice.

She caught heat for cultural appropriation when she wore cornrows in the video for her song "This is How We Do" and caused controversy when she performed at the American Music Awards in 2013 while dressed as a geisha.