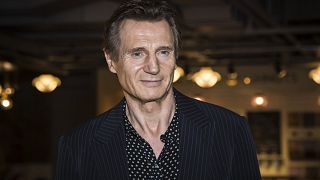 Liam Neeson said that he is "ashamed" to think he once stalked the streets looking for a "black bastard" to kill after someone close to him told him she had been raped.

In an interview published in The Independent on Monday, Neeson said when the woman told him of the rape "my immediate reaction was ... did she know who it was? No. What color were they?"

The woman told him a black person had raped her.

"I went up and down areas with a cosh, hoping I'd be approached by somebody," Neeson said. A cosh is a heavy stick used as a weapon.

"I'm ashamed to say that, and I did it for maybe a week hoping some 'black bastard' would come out of a pub and have a go at me about something, you know? So that I could kill him," Neeson said.

"It was horrible, horrible, when I think back, that I did that," he said, adding that he's never told the story before "and I'm saying it to a journalist. God forbid."

Neeson's comments came during a publicity stop for his new movie "Cold Pursuit," in which his character seeks revenge after his son is killed by a drug gang. He told the tale to demonstrate how a quest for vengeance can become "primal" when a loved one is involved.

"It's awful. But I did learn a lesson from it," Neeson said. "I understand that need for revenge, but it just leads to more revenge, to more killing and more killing."

Reaction on social media came swiftly after audio and text versions of the interview were published.

Journalist Ash Sarkar criticized Neeson as racist and for playing the victim after the woman was raped.

Neeson's was also called out by many others as being racist for the comments.

And some were flabbergasted that he chose to share the story.

A few defended the actor, saying his words were taken out of context or could be used to spark dialogue.

Neeson's representatives did not immediately respond to a request for comment.